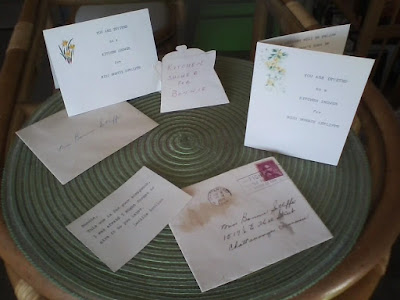 While checking my blood pressure this morning, I noticed a small flat box of papers on the bookcase next to me and, after I had finished recording my BP score, sorted through the box.  I've been decluttering, but hadn't even noticed this little box.

Imagine my shock to discover a small envelope from Ada's mother to "Miss Bonnie Setliffe" in Chattanooga, Tennessee. It was postmarked January 14, 1959, exactly 59 years to the day I wrote about Ada yesterday.  Inside was a typed note and an invitation to a kitchen shower for me ... given by Ada Rentfro and her mother.  I'm amazed to find this after not seeing it in over half a century, and I'm astounded it's such an exact date!

The outer envelope has a purple 4-cent stamp on it and was sent to me at this address:


I googled my old address and "went" there with the help of Google maps and "walked" around the block.  There's a building that looks like a warehouse in what was our grassy area of the projects, a bunch of World War Two barracks converted to make housing for the soldiers and sailors coming home from the war to find there was not enough housing for their families.  In other words, everybody's daddy in our neighborhood had been in the war.  (Back then, few women were in the military.  I wrote about one exception a few years ago, calling her an "independent dame," but I digress.)

The two invitations are TYPED, not xeroxed, without errors ... except one tiny one, where Ada or her mother typed an "e" over an "r" in the last "e" of "Please" Reply.  There was no DELETE key on manual typewriters, so messing up meant having to retype the whole thing.

Front of both invitations:

YOU ARE INVITED
to a
KITCHEN SHOWER
for
MISS BONNIE SETLIFFE
Inside:

Given by:  Miss Ada Rentfro
Mrs. Lucille Scollon
Please Reply:  MA2-8842
Inside, opposite side:


Bonnie's kitchen will be yellow and white,
If it is empty, won't that be a fright!

To feed her man she'll need just lots
Of kitchen gadgets and bowls, pans and pots;

For her Clyde dear she'll have to feed,
Let's give her all the things she'll need.

Seven-thirty to come, on Friday night,
January 23rd, will be just right -

There was also a note enclosed:


Bonnie,
This one is for your scrapbook,
I was afraid I might forget to give it to you later.
Lucille Scollon

The postmark, which is hard to read in the photo, says:

How do you like that MA2-8842 phone number?  If I remember correctly, examples of Chattanooga numbers were Madison and Tremont.  Maybe I'll suddenly remember my old phone number in a few days; that's how my elderly memory seems to work these days.
Posted by Bonnie Jacobs on 1/15/2018 01:30:00 PM
Labels: meditation

That's wonderful that you found this; what a fun memory