I acquired three of the four books in this series since doing last week's library loot post — and have already finished reading them.  My review covers all four books. 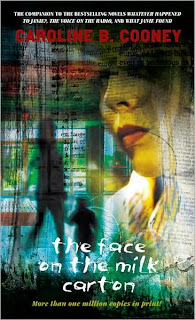 
I already had this first book in the series and reviewed it last week for Banned Books Week. Seeing her own face on a milk carton launched this series, as Janie tries to get to the bottom of the mystery of "Whodunit?" And what was "it," anyhow?  If she was kidnapped, did her loving mother and father do it?  She couldn't very well ask them, and if she turned to the police, what would happen? 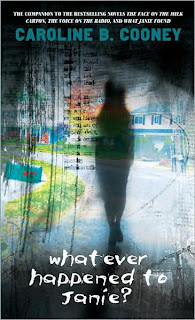 
Janie grew up in Connecticut, so the first book in the series (Face, above) is set in that state.  This second in the series is set in New Jersey, where Janie's birth family lives.  We learn more about them as Janie tries to adjust to thinking about a whole new family and siblings she did not grow up with. 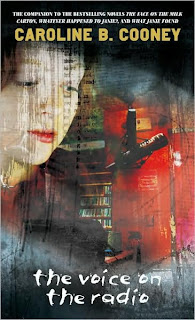 
This third in the series is set in Boston, where Janie's boyfriend and next-door neighbor has started college.  He has also become a talk-show "personality" for the school's radio station, and loving the sound of his own voice gets him in trouble with Janie. 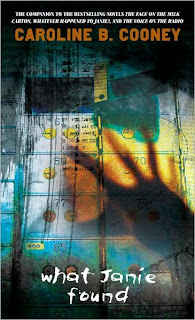 
Janie's brother Stephen, from her birth-family, has gone to school in Colorado to move far from family.  Four books, four states, as these teenagers get around.  In one book, a couple of the characters take a trip into New York, as well.  I really liked that the books were not all set in one location.  One person who commented on my review of the first book said the fourth was "only so-so," but I think it took all four to tie together all the loose ends and wrap up the story to my satisfaction.

Notice that I've rated each of the four 9 out of 10, excellent books.

But I don't like the covers at all.  In my review of the first in the series on Friday, I used a cover I liked.  It shows a milk carton with a child's picture on it.  That makes sense; these blurry covers don't.


ONE MORE PIECE OF LOOT
I'd read about this book recently and made a note to get it some day, so when I passed it on the library's "new books" shelf yesterday, I took it home with me.  Yes, even knowing it's a 7-day book. 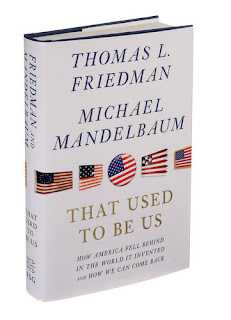 That Used to Be Us: How America Fell Behind in the World It Invented and How We Can Come Back ~ by Thomas L. Friedman and Michael Mandelbaum, 2011, sociology


America faces four major challenges, on which its future depends, and it is failing to meet them. Friedman and Mandelbaum analyze those challenges — globalization, the revolution in information technology, the nation’s chronic deficits, and its pattern of energy consumption — and spell out what we need to do now to rediscover America and rise to this moment.  "We need to study harder, save more, spend less, invest wisely, and get back to the formula that made us successful as a country in every previous historical turn. What we need is not novel or foreign, but values, priorities, and practices embedded in our history and culture, applied time and again to propel us forward as a country."

Library Loot is a weekly meme co-hosted by Claire from The Captive Reader and Marg from The Adventures of an Intrepid Reader that encourages bloggers to share the books they’ve checked out from the library.  Marg has the Mister Linky this week, if you'd like to share a list of the loot you brought home.
Posted by Bonnie Jacobs on 10/05/2011 01:05:00 PM
Labels: book review, library loot

I had no idea there were four books in that series. I wonder if they are too young for high school students?

I don't think so, Helen. Donna just walked in, so I asked her (she was a high school librarian) and she agrees with me. The teens are in high school and college and do things like visiting a college as they decide where to go. The "radio" book (#3) is about being on the college radio station.

I used to write fan letters to Caroline B. Cooney when I was a child and I remember how excited I was when The Voice on the Radio came out when I was in grade 4! It was a big publishing event among my gang of 10 year olds!

I saw Friedman and Mandelbaum on "Charlie Rose" a few weeks ago talking about the book and it was a very interesting discussion. I hope you enjoy it!

Claire (The Captive Reader), if you loved the books when you were ten, does that mean maybe the books ARE too young for high school students?

Bonnie, I was most interested in YA fiction before I entered my teens and then, by the time I was in high school, found it all a bit too young. So for some readers, yes, I think these books, even though the characters are teens, might be too easy. However, if they just want a quick, undemanding read, then these would surely be appropriate at any age!