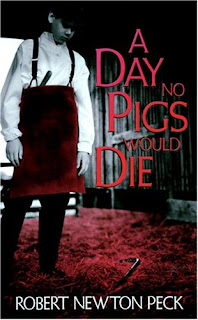 I've had a hard time trying to decide how to tell you about this book.  It's been challenged and banned because of its graphic violence and sexual content.  It has both.  It starts with the boy, Robert, nearly getting killed saving a calf when the cow had trouble giving birth.  The novel has a scene where a boar is thrown in with a pig who hasn't gone into heat and basically rapes the pig who is screaming the whole time.  And there's one heartbreaking day when the pig raised by a 12-year-old boy must be slaughtered to provide food for the family.  The boy, who "becomes a man" that day, had already learned how getting his chores done felt good, and he is aware of the beauty of the world around him.  There was a lot of violence, but it depicted what life was like on a Shaker farm.

One complaint given by those who challenge this book is that the novel condones animal cruelty.  And this is the scene that bothered me the most.  The boy's father, Haven, invites his neighbor to let his dog learn weasel-killing skills on a weasel Haven has captured in the chicken coop.  The two animals are thrown in together.  When it's over, the weasel is dead, but the dog is so badly injured that she must be put to sleep.  However, the father realizes he can't ever let that happen again, no matter how many chickens he loses.  Nobody enjoyed what happened, and it wasn't done out of callousness.  The father is trying to teach his son about "doing what's got to be done."


"I swear," Papa said.  "I swear by the Book of Shaker and all that's holy.  I will never again weasel a dog.  Even if  I lose every chicken I own."

His father told Robert he would not live much longer, and the boy would have to be a man at thirteen.  We see how tender-hearted Robert is by what he does afterwards.


"I sat watching the red cinders turn gray.  I stayed there until the fire died.  So it would not have to die alone."

Haven, the father, was a butcher.  He's the one who had to slaughter his son's pig.  That's the most memorable scene in the book -- and the one shown on the cover above.  The boy/young man said, 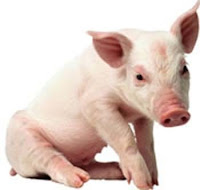 And the son forgave what his father had to do.  Robert was given the piglet, named it Pinky, raised it, fattened it up, and won a prize showing her.  The pig was barren, and the family didn't have enough meat for the winter or enough feed to keep the pig as a pet.  Slaughtering it was necessary.  The son knew...


"He did it. Because he had to. Hated to and had to. And he knew he’d never have to say to me that he was sorry."

When Haven the butcher died, his co-workers came to his funeral, making that "a day no pigs would die."  Because of Haven’s death, the pigs would live an additional day.