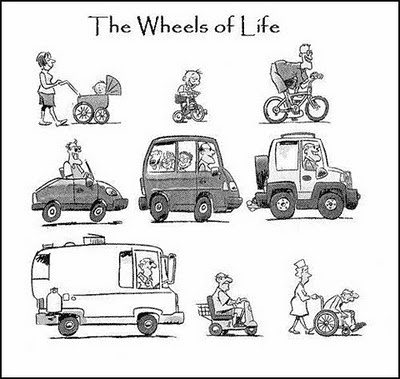 
Since it is almost my birthday and because my spiritual direction peer group is reading Living Fully, Dying Well by Edward W. Bastian and Tina L. Staley, I am thinking of my life in stages. For the latter group, we filled out a form dividing our life into 7-year increments, documenting "significant moments," then "people who guided and influenced me," and ending with the question, "What did this phase contribute to the continuum of my life?" This was a life Review Exercise devised by Rabbi Zalman Schachter-Shalomi.

For today's Friday Five, I am suggesting that we each divide our age into 5 sections. You don't have to say your age or ages for the different parts, unless you want to. In each of the 5 points, please describe a memorable and/or significant event, either good or unpleasant.


When I was five, all my friends began first grade (we didn't have kindergarten back then), and I felt left behind.  My mother's best friend taught piano and let me start early, since I knew the alphabet (piano players need to know A, B, middle-C, D, E, F, G) and my numbers (counting time is also important to musicians).  I loved the piano, having stood at my grandmother's left elbow as she romped all over that piano making the most lively music.  In junior high I took up clarinet and then bassoon, and in high school I played in concert band, orchestra, marching band, and Chattanooga Youth Symphony.  In 1955, we marched on national television, performing this routine at a football game in Washington, D.C.  Here are some of our routines, found on YouTube.  (I played the glockenspiel on the field, not the bassoon.)

I really must include this next one, which was probably my senior year (when I was band captain) in the fall of 1957.   I remember well the unique drum beat (three against two) that's around the 3:20 mark in this YouTube video.


After one semester of college, I married a 24-year-old who had already served four years in the Air Force and promised to put me through medical school.  As soon as we were married, he told me I was his wife now and "women don't need higher education."  I found a creative outlet in writing articles that were published locally, nationally, and internationally.  Eventually, I did go back to college, but after fourteen years and three children, I decided I couldn't stay in that marriage any longer.


I finished college, getting a Bachelor of Arts with a double major (BA in Philosophy and Religion and in English), and then worked in a variety of jobs:  library assistant, planner for the county's CETA program (Comprehensive Education and Training Act), editor of two in-house publications, management trainer teaching EEO compliance (in other words, educating managers about racism and sexism).  Eventually, I started my own company, leading seminars and teaching continuing education classes in communication skills, time management, and creativity.  By then my children were grown and one was already married.


I went back to school, getting a Master of Divinity (MDiv) from Candler School of Theology at Emory University in Atlanta at the age of 47.  My first grandchild made me a grandmother on Grandparents Day while I was still in seminary.  My first church appointment as an ordained United Methodist minister had mostly elderly members, and I was called on to do fifteen funerals my first year.  In churches with younger members, the children called me Rev. Bonnie.  Meanwhile, grandchildren were being born almost every year, until the seventh, who didn't arrive until 2000.  I stayed ten years in my last appointment before retiring, during which time I became an adjunct instructor at Chattanooga State Community College, teaching "Religions of the World."  Teaching there continued into my retirement years. 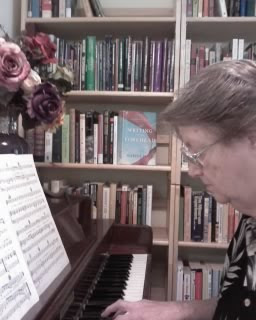 
Using part of my retirement funds, I opened a bookstore with my friend Donna.  My mother died the week we were scheduled to open the store, which was rough.  But I had fun while it lasted (2004-2006).  Now, two of my seven grandchildren are married, and I have two great-grandkids (Raegan, age 2, and Jaxon, 10 months old).  I'm still into books, as you can see by this book blog, and I am writing a book or two.  Oh, and I still like to romp on the piano the way my grandmother did when I was a little girl.

Bonnie, it was such fun to read and learn more about you. What a varied life you have had. I am impressed with all the jobs or vocations you have lived, especially have a bookstore! I like you become a grandmother when you were in seminary, but it shows you started having children at a younger age than I did--as I didn't become a grandmother until I was 60!

How confusing does this sound: My son's son has a son, and my daughter's daughter has a daughter.

A couple of days after my first grandson was born (the one who is now a daddy himself), a seminary classmate yelled across the quad between classes, "Hey, Grandma!" I stopped and looked all around until I saw him, up on the steps into the chapel. I went over to tell him I knew my "name" already!

Three against two...I am sure there is a sermon illustration in that one. Loved this.

What riches! Thank you.

Bonnie I loved reading about your life, ans I loved that you found those videos!