What’s the oddest book you’ve ever read?
Did you like it?  Hate it?  Did it make you think?

After much thought, I'd have to say it would be anything written by Franz Kafka (1883-1924), a Czech novelist who wrote in German. 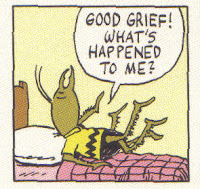 The first of his writings that came to my mind was Metamorphosis, a novella about a man who woke one morning to discover he had become a cockroach.  I've also read his novels, The Trial (1925) and The Castle (1926).  For his characters, the world was like a nightmare.  In The Trial, the defendant can't find out what he's done wrong, what he's being charged with.  In The Castle, the protagonist can't gain access to the castle, and he can't find anyone to help him.  Each main character is isolated in a fearful, dehumanized world.

I did rather enjoy the books, maybe more in hindsight as I think about how the world around me works.  Maybe I especially like to think about Kafka's odd worlds when I have to deal with bureaucrats. 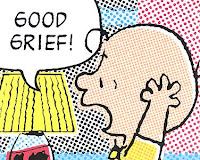 "Kafkaesque" entered the English language as an adjective meaning "marked by a senseless, disorienting, often menacing complexity," as in Kafkaesque bureaucracies.

It does sound very odd.

Now that's what I call kismet! Love the Charlie Brown cartoon - the very definition of oddity :)

Metamorphosis was the first thing that came to mind when I read the question. That definitely was an odd story.

Kerri, Character Connection, and I all managed to write about Metamorphosis. That in itself is "odd" ... LOL.

Geek Love by Katherine Dunn. If you've never read it and aren't squeamish, it is the weirdest book you'll ever love. Honorable mention to Vurt by Jeff Noon.