Fifteen books ~ #4 ~ The Heart of Christianity 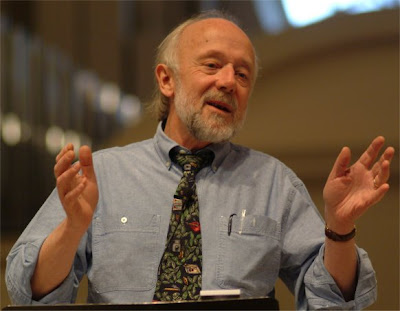 I heard Marcus Borg in 2006, when he spoke at First-Centenary United Methodist Church about his book The Heart of Christianity, which is the fourth in my series of "fifteen books that will always stick with me." One of the most helpful things I got from this book was Borg's distinction between an earlier paradigm concerned with right beliefs and an emerging paradigm which focuses more on transformation and relationships.

Since I've already done a review of this book, let me tell you about some other books by Borg, who was Hundere Chair of Religion and Culture in the Philosophy Department at Oregon State University until his retirement in 2007. In Reading the Bible Again for the First Time, subtitled Taking the Bible Seriously but Not Literally, he makes it clear that stories need not have actually happened to be true. The Bible is the Word of God in a metaphorical sense and can be used as a way to help us see God. A few years ago I read The Meaning of Jesus: Two Visions that Borg co-authored with N. Thomas Wright, a well-known conservative British New Testament scholar. Borg has co-authored three books with John Dominic Crossan, whom I met last year: The Last Week (2006), The First Christmas (2007), and The First Paul (2009). For a complete list of his books, check out his web site: http://marcusjborg.com.

Barbara Brown Taylor said of Borg, “With great clarity and pastoral genius, Borg offers questioning Christians a way to keep their faith without shutting down the search for truth.” She's the author of Leaving Church, that I reviewed here, and An Altar in the World: A Geography of Faith, which I am currently reading to discuss with my book club.