The Social Construction of Reality ~ by Peter L. Berger and Thomas Luckmann (1966) is #11 in my series on "fifteen books that will always stick with me." I read this decades ago, so I don't remember details. What I do remember is the flash of insight that came from realizing we construct reality. People of a particular culture decide what's real and what isn't, and thus we "see" what society has decided we shall see.


"...the primary knowledge about the institutional order ... is the sum total of ‘what everybody knows’ about a social world, an assemblage of maxims, morals, proverbial nuggets of wisdom, values and beliefs, myths, and so forth” (p.65).

Let me give you an example of how I undersand what the authors mean. I grew up in a time and place where "everyone knew" -- meaning the grown-ups around me "knew" -- there's no such thing as a ghost. Therefore, if a child is frightened by a "ghost in the closet," her parents assure her nothing is there. The little girl may not be convinced right then, but by the time she is an adult she too will "know" there are no ghosts.

I grew up long before the movie "Sixth Sense" was popular in 1999. As a matter of fact, I was a 59-year-old grandmother by the time that movie child confided in his psychologist that he "sees dead people that walk around like regular people." One day recently I was captured by this phrase in a synopsis of Places Left Unfinished at the Time of Creation by John Phillip Santos (1999): "as a girl, she saw a dying soul leave its body." I had never expressed it quite that way, but I have described many times what I saw when my grandfather died. I was four years old and can still visualize the scene. The adults were all around his hospital bed, looking down at him. I wondered why they weren't looking up, since he was floating over them toward the far wall on my right, headed toward the intersection of wall and ceiling. And then he was gone. On the day I read that synopsis I decided to google an illustration for "soul leaving a body." This is what I found. 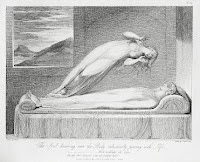 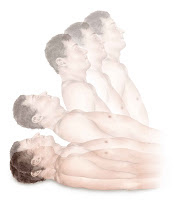 This drawing has the right idea, except it's way too stiff. Though my grandfather's form was wispy like steam, the motion was very fluid and natural. And he went head first off to the right, kind of like the one on the right. However, the rising soul/spirit didn't exactly look like his body. It looked more like steam rising from hot coffee, though identifiable as the person himself. I could tell it was my grandfather and wondered why the grown-ups weren't looking where he was going, toward the wall and ceiling over to my right, as in these pictures.

The Social Construction of Reality confirmed something I knew deep inside, probably since the age of four. For allowing me to trust my reality, I rate this book 10 of 10.
Posted by Bonnie Jacobs on 9/25/2009 12:14:00 PM
Labels: 15 books, book review

It is so true, and interesting, that "reality" is a cultural construct, as discussed in several of my anthropology classes.

But this leads to a deeper question: once the veil is removed, the "culture" stripped away, what remains?

Actually, you've already taken a step towards answering this question in your article. You SAW a spirit leaving a body. So...it would seem that cultural constructs are, or can be, blinds which rather block us from accurately perceiving the world around us.

Perhaps the bigger question becomes, how can we, as individuals & as a society, remove the blinds without coming apart at the seams? Whatever the answer...I believe it is blogs like yours which lead the way.

I think we need to question our assumptions so that our eyes can be opened to the possibility of seeing more than we already know.