An Altar in the World by Barbara Brown Taylor, 2009

Sub-titled "A Geography of Faith" this book is about becoming aware of where you are by moving and doing. The author is almost saying, "Don't just endlessly think about it; get up and DO something." And she gives us a dozen things to try. One practice she did, after years of excuses, was to walk a labyrinth. It was in a setting of pine trees. 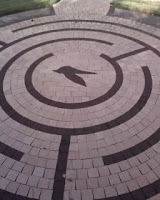 "The first thing I noticed was that I resented following a set path. where was the creativity in that? Why couldn't there be more than one way to go? The second thing I noticed was how much I wanted to step over the stones when they did not take me directly to the center. Who had time for all those switchbacks, with the destination so clearly in sight? The third thing I noticed was that reaching the center was no big deal. The view from there was essentially the same as the view from the start. My only prize was the heightened awareness of my own tiresome predictability. 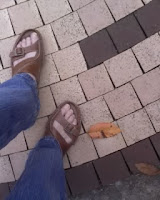 "I thought about calling it a day and going over to pat the horses, but since I predictably follow the rules even while grousing about them, I turned around to find my way out of the labyrinth again. Since I had already been to the center, I was not focused on getting there anymore. Instead, I breathed in as much of the pine smell as I could, sucking in the smell of sun and warm stones along with it. When I breathed out again, I noticed how soft the pine needles were beneath my feet. I saw the small mementos left by those who had preceded me on the path: a cement frog, a rusted horseshoe, a stone freckled with shiny mica. I noticed how much more I notice when I am not preoccupied with getting somewhere" (pp. 57-58).

Back at the place where she had begun, she realized, Surely the Lord is in this place -- and I did not know it!


The beauty of physical practices like this one is that you do not have to know what you are doing in order to begin. You just begin, and the doing teaches you what you need to know. (p. 58)

The small labyrinth in these photos is at the Episcopal church near my house, so I set out to do what she suggested. It occurred to me later that I should have walked it barefoot, instead of in my sandals, since another of the author's exercises in awareness is to feel grass on bare feet or (in this case) the roughness of sun-warmed bricks.

An Altar in the World: A Geography of Faith is for people who want to deepen their spiritual life through a heightened awareness of the physical self in this world. Like Jesus, she tells stories so that I was able to see and feel her experiences. Her reverence for a saltmarsh mosquito brought tears to my eyes (click the link to read my short report).


"In a world where faith is often construed as a way of thinking, bodily practices remind the willing that faith is a way of life" (page xvi).

Bonnie,
Thank you for sharing your blog with me (and for reading mine!).

I am reminded of the Path of Life Garden (http://www.pathoflifegarden.com/) which I visited in Vermont while kayaking in July. It has a labyrinth. The sign at the entrance, like the signs at the entrances of many of the features of the park, points in with the word "more" and around with the word "less." I must say, I think people who are satisfied with "less" are admirable. As for me, I had to have "more!"

Thanks, Katt. I especially enjoyed the photographs on the Path of Life Garden site:

I've just spent most of an hour listening to the Tapestry radio interview with Barbara Brown Taylor. It was great, and I hope all of you will take the time to hear it, too. (Click on the link to BBT's web site at the end of the post.)