Looking for Salvation at the Dairy Queen ~ by Susan Gregg Gilmore, 2008 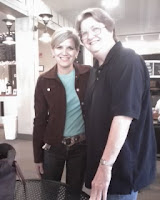 I'd been meaning to read this book, but hadn't yet gotten a copy when I learned the author would be at Rock Point Books in Chattanooga last night to talk to her readers. I got the book and was ready to discuss it when I arrived at the meeting. First surprise: Susan Gregg Gilmore is very petite (in this photo of us, I'm the not-petite one). Second surprise: she was a student of Lee Smith. You know that Southern writer, don't you? Third surprise: well, it wasn't really such a surprise, since Susan's so good at putting words together on paper: she had her rapt audience wrapped around her little finger. We laughed, we smiled, we asked questions, we wanted more -- which we'll get in her next book: A Girl Called Sister. But first, let me tell you about this one.

Looking for Salvation at the Dairy Queen ~ by Susan Gregg Gilmore, 2008, fiction.

The narrator is Catherine Grace Cline, a teenager who wants more than anything in this world to get out of the little town of Ringgold, Georgia. Her daddy is the preacher at Cedar Grove Baptist Church, which was founded by Catherine Grace's great-granddaddy William Floyd Cline, who had been "one of the most prolific bootleggers the state of Georgia has ever known" (p. 12). "William Floyd found the Lord somewhere in the congregation's third singing of the fourth verse of 'Just As I Am" (p. 13), and within days he was "sermonizing from his own makeshift pulpit next to a grove of cedar trees" (p. 14). When one preacher died, his son took over the pulpit. Catherine Grace's daddy was the current Reverend Cline.

"You see, three generations of Cline men had been known for three things -- their love of the Lord, their devotion to their family, and their commitment to growing the perfect tomato" (p. 11). [Did someone say perfect tomato"?]

One of the women at the book club meeting last night asked a logical question, since the reverend at Cedar Grove had always been a Cline and the current one had no sons: "Did you think about making Catherine Grace the next preacher?" The story is set in the early 1970s, not exactly a time when a woman would have been welcome in the pulpit of a Baptist church in a small town in the South. Well, not even today, in some Baptist churches. So that wouldn't have worked very well, but I personally believe Catherine Grace would have made a better preacher than her daddy! Just saying. Still, the ending Susan Gilmore gave us was very satisfying, with a lot to think about or discuss in a book group.

Hey, Bonnie! Thanks for doing a review just for me! :-) I agree with you that it was a fun book---it was an easy and very agreeable read. I could very much see the influence of Lee Smith in her writing, especially in the humor.

I found this to be a delightful book.
B.

If you'd like to read books about each state, take a look at my blog "Book Around the States." I've just posted this book as one to read for the state of Georgia:

Thank you so much for the lovely comment and review -- both are greatly appreciated.

The Southern Lit Book Club was fantastic. Everyone was so gracious and welcoming and asked such poignant, insightful questions.

We will definitely do it again when my second book comes out in June!

Bonnie, I enjoyed your coverage of our Southern Lit Meeting with Susan Gregg Gilmore. She was a treat, wasn't she? Can't wait till she visits again in June. Also, I enjoyed seeing your map of the U.S. with places the stories are set.

I am coming to this late, thank you for giving me the link!

Helen, I forgot to mention that the tornado that ripped up trees within two houses my mine last April also tore through Ringgold, Georgia, which is a few minutes south of Chattanooga. According to Wikipedia, eight people died in Ringgold including an entire family of four, and at least thirty other people were injured.

Here's what I posted about the tornado in my St. Elmo neighborhood of Chattanooga: