Continuing my series on "fifteen books that will always stick with me," my #6 in alphabetical order is Krakatoa: The Day the World Exploded: August 27, 1883 by Simon Winchester.

This book was published in 2003, a hundred and twenty years after the massive volcanic explosion of the island of Krakatoa. At the time I was managing a bookstore in Trenton, Georgia, and shouldn't have been surprised that few, if any, of my customers were interested in that long-ago event. Perhaps a better question would have been to ask myself why I was so taken by it. I think I know why.

Many years ago I read something about Krakatoa, a volcanic island in the Sunda Strait between the islands of Java and Sumatra in Indonesia. When the volcano erupted in 1883, two-thirds of the island disappeared. The explosion, the resulting tsunami, and fumes and ashes killed over 40,000 people. But the image that stayed with me was of darkened skies all around the world, making everything red.

Yesterday I reviewed a book and mentioned my father's father; this book brings to mind my mother's mother. I don't have a digitized photo of her (like the one of him), but I do know that she was slightly under five feet tall and -- more importantly for this tale -- was born in December 1880. Notice the date when Krakatoa blew up. Little Inez Geneva Underwood, who would one day be my grandmother, was two-and-a-half years old. She was THERE, in that world, when Krakatoa exploded. When the book came out, I wanted to read about that world-shattering event. 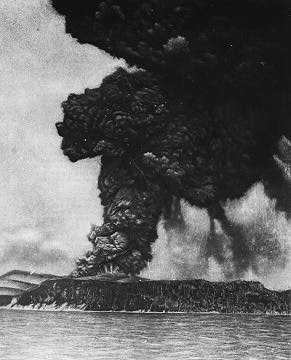 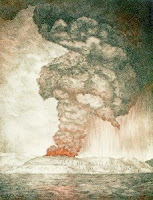 It's easy to see that the two drawings were made from the black-and-white photograph above them, which was taken at the beginning of the eruptions of Krakatoa.

When I learned about this book, I wanted to read it immediately. The maps were helpful, especially since the author gives not only details about the seismic events of that day, but also what happened to people on ships and on land all around the Javanese island that vanished in a volcanic eruption of almost unimaginable force, heard as far away as Australia.

I probably got more from reading this book because I discussed it with my friend Margreet as we read. And maybe because I kept thinking that someone I can remember (even though Inez died when I was three) was alive during the greatest volcanic explosion of modern times. Rated: 10 of 10, couldn't put it down.
__________

I wrote about Krakatoa again after the eruption of the volcano in Iceland whose ash wreaked havoc with air travel in April 2010.  Click here to read that post.
Posted by Bonnie Jacobs on 9/04/2009 12:07:00 AM
Labels: 15 books, book review