Fifteen books ~ #8 ~ The Mists of Avalon

Continuing my series on "fifteen books that will always stick with me," #8 in alphabetical order is ...

The Mists of Avalon ~ by Marion Zimmer Bradley, 1982

When I think of Avalon, I think of a boat gliding toward a mist-shrouded isle.  It's also a place lost in the mists of time, at least since Christianity took over Britain.

In Bradley's version of the story, which gives us the legend of King Arthur from the viewpoint of the women around him, I could see the goddess religion being supplanted.  To do this, the author shows the holy place of each in exactly the same place.   That makes for a bit of surrealism, as someone who is on misty Avalon will occasionally hear the Christians who are all around them at the same time — or would that be, at a later time?  Jana L. Perskie, one of Amazon.com's Top 100 reviewers, said:


The tale is told from the points of view of the much maligned Morgaine (Morgana Le Fey), Priestess of Avalon, and Gwenhwyfar (Gwynivere), Christian princess and future queen of Camelot. ... Believers of each religion seek to control the throne, but ultimately Christianity ascends to be the organized religion of the land.  Since Morgaine is a Druid High Priestess, it would explain why she received such a bad rap in Christian civilization.

I came away from the book much more sympathetic to Morgaine, also known as Morgana le Fey, which means "of the faeries."   Women such as Arthur's mother, sister, and wife didn't think like the knights of the round table, but had different concerns. 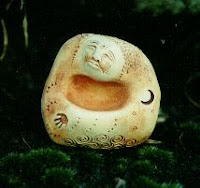 Three friends and I are studying Joseph Campbell's The Power of Myth, and this week's chapter happened to be "The Gift of the Goddess."   One of the women has an unglazed copy of a tiny goddess figurine similar to the "Goddess of Willendorf" on the left, and I have a figure like the goddess-crone with the thumb-shaped depression on the right.  Both represent the fertility of Mother Earth.  The earth feeds and sustains us as a mother does her child.  There are no fertility figurines in The Mists of Avalon, but we do see one way of being religious pushed aside by another, just as goddess figurines were destroyed by devotees of the new religion.  I think it's interesting that these little figures are now turning up all over the world.