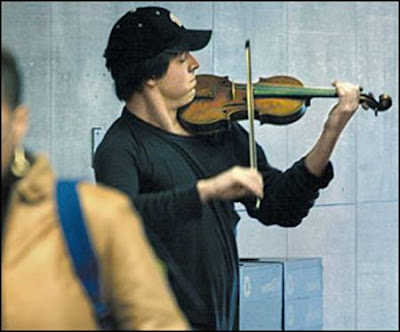 In Washington, D.C., at a Metro Station, on a cold January morning in 2007, this man with a violin played six Bach pieces.  During that hour, approximately 1,100 people went through the station, most of them on their way to work.

After about 3 minutes
A middle-aged man noticed that there was a musician playing.  He slowed his pace and stopped for a few seconds, and then he hurried on to meet his schedule.

At 4 minutes
The violinist received his first dollar.  A woman threw money in the hat and, without stopping, continued to walk.

At 6 minutes
A young man leaned against the wall to listen to him, then looked at his watch and started to walk again.

At 10 minutes
A 3-year-old boy stopped, but his mother tugged him along hurriedly.  The kid stopped to look at the violinist again, but the mother pushed hard and the child continued to walk, turning his head the whole time.  This action was repeated by several other children, but every parent -- without exception -- forced their children to move on quickly.

At 45 minutes
The musician played continuously.  Only six people stopped and listened for a short while.  About twenty gave money, but continued to walk at their normal pace.  The man collected a total of $32.

After 1 hour
He finished playing and silence took over.  No one noticed and no one applauded.  There was no recognition at all.

No one knew this, but the violinist was Joshua Bell, one of the greatest musicians in the world.  He played one of the most intricate pieces ever written, with a violin worth $3.5 million dollars.  Three days before, Joshua Bell sold out a theater in Boston where the seats averaged $100 each to sit and listen to him play the same music. 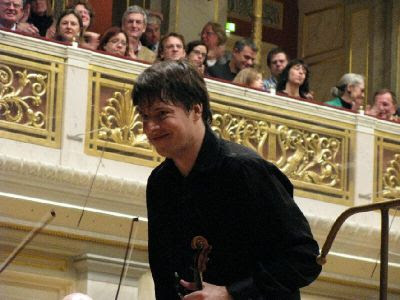 This is a true story. "His performance was arranged by The Washington Post as an experiment in context, perception and priorities -- as well as an unblinking assessment of public taste: In a banal setting at an inconvenient time, would beauty transcend?" This experiment raised several questions:


In a common-place environment, at an inappropriate hour, do we perceive beauty?
If so, do we stop to appreciate it?
Do we recognize talent in an unexpected context?

If we do not have a moment to stop and listen to one of the best musicians in the world, playing some of the finest music ever written, with one of the most beautiful instruments ever made, how many other things are we missing as we rush through life?


"At the beginning," Bell says, "I was just concentrating on playing the music. I wasn't really watching what was happening around me . . . It was a strange feeling, that people were actually, ah . . ." The word doesn't come easily. ". . . ignoring me."

Watch and listen to 35 seconds of his playing by going to the video in the article Pearls Before Breakfast in The Washington Post.  (I do hope you caught the "pearls before swine" allusion.)  But as the article also says, "Context matters."  Later in the article, you can watch 58 seconds of the first person to stop and listen, at the 6-minute mark above.  The reporter caught up with some of the people and asked them about their experience, and I really enjoyed reading their responses.  Altogether, there are four short videos of people's reactions to the musician, along with their stories.

Wow. Amazing to me that people didn't recognize a brilliant musician.

Wow, awesome story, Bonnie. Having never been in a subway, I cannot say from personal experience, but from movies etc., I would say dawdling in the subway is not a good idea, keep moving, especially if you are heading to work. What a shame. We are too busy. Thanks for this!

I think people are so programed to ignore someone asking for money that they don't even stop to figure out if they are good/great or not. We live in a world where we have a schedule and a routine and don't stop for things that might change that. So sad!

Sad that more people didn't take a minute or two to listen. I don't like the comment it is on society.