Another day, another book ~ or four 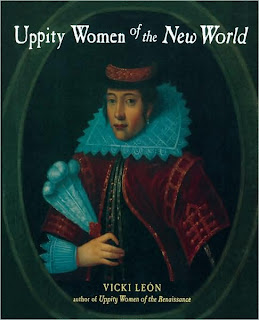 I like the second definition of "uppity" that I found at dictionary.com:


rebelliously
self-assertive;
not inclined to
be tractable
or deferential

I happened upon one of the books in the Uppity Women series yesterday and decided I really needed stories about "225 altruists, abolitionists, and adventurers."

Mary Haydock Reibey is in the section on Early Aussies.  When her husband died and his business partner keeled over a month later, Mary took over their cargo and trading business.  She added new warehouses, vessels, and real estate and, within nine years, "was looking at a fortune of 20,000 pounds."  There's more in her two-page story (pp. 216-217), but I'm most impressed that she was not only "in the money" but also on it.  Literally.  She's on this Australian twenty-dollar bill.

I also brought home three books from the library this week:

Having read The Red Tent and Good Harbor by Anita Diamant, I am excited about reading another of her books.  This one, according to the dust jacket, is based on the "true story of the October 1945 rescue of more than two hundred prisoners from the Atlit internment camp, a prison for 'illegal' immigrants run by the British military near the Mediterranean coast north of Haifa."  Diamant dedicated this book to her grandfather and her uncle, both victims of the Holocaust.

I've been meaning to read this ones for so many years that I began to wonder if I'd already read it and just couldn't remember the story line.  Nope.  This is the book I started reading when I got home with it, and it's not one I've read before.  I'm up to page 234 of 308 pages, and the main character is unlike any protagonist I can remember.

The short first section is background about the town of Habit, Kentucky, where most of the story takes place.  The next three sections could be called Hers, His, and Theirs -- as seen through the eyes of the central character, then her husband, then the daughter.  I'm holding my breath to find out if the daughter will finally figure out what's what with her parents.

Although I wrote about the cover of this book in January 2008, I never read the book.  Characters in this novel include a young college dropout who wants to be a graphic novelist; a philosophical, ex-punk Episcopalian pastor; and the nanny of the pastor's children.  It sounds like a beach read to me, which means I'm not even sure I want to read it.  But it does have the right cover. (To understand that remark, you'll have to read my earlier post.)
Posted by Bonnie Jacobs on 8/01/2010 01:48:00 AM
Labels: books, new crayons

I loved Bel Canto by Patchett. I have yet to read anything else by her for fear I won't like it as much. Strange logic.

If I was a fan of historical fiction I would read Diamant. I've heard she's amazing.