After reading and reviewing the adult novel Four Souls by Louise Erdrich a couple of days ago, I put a bunch of her children's books on hold at the library.  These are the books I brought home today. 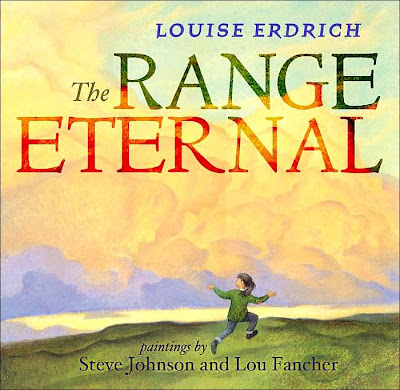 The Range Eternal (2002) is about the woodburning stove at the heart of a family's little cabin home in the Turtle Mountains of South Dakota. 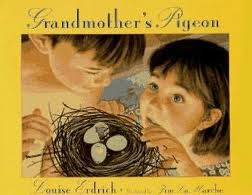 Grandmother's Pigeon (1996) is about raising three birds of an extinct species -- passenger pigeons!

The Birchbark House (1999) seems to be the first in a series of books about Omakayas (Oh-MAH-kay-ahs).  The story is set on an island in Lake Superior in 1847.  From the dust jacket:


For as long as Omakayas can remember, she and her family have lived on the land her people call the Island of the Golden-Breasted Woodpecker.  Although the chimookoman, white people, encroach more and more on their land, life continues much as it always has.  Every summer the family builds a new birchbark house; every fall they go to ricing camp to harvest and feast; they move to the cedar log house before the first snows arrive, and celebrate the end of the long, cold winters at maple-sugaring camp.  In between, Omakayas fights with her annoying little brother Pinch, plays with the adorable baby, Neewo, and tries to be grown-up like her beautiful older sister, Angeline.  But the satisfying rhythms of their lives are shattered when a visitor comes to their lodge one winter night, bringing with him an invisible enemy that will change things forever.

The Game of Silence (2005) is a sequel to The Birchbark House. From the dust jacket:


Her name is Omakayas, or Little Frog, because her first step was a hop, and she lives on an island in Lake Superior. It is 1850 and the lives of the Ojibwe have returned to a familiar rhythm: they build their birchbark houses in the summer, go to the ricing camps in the fall to harvest and feast, and move to their cozy cedar log cabins near the town of LaPointe before the first snows.

Satisfying routines of Omakayas's days are interrupted by a surprise visit from a group of desperate and mysterious people. From them, she learns that all their lives may drastically change. The chimookomanag, or white people, want Omakayas and her people to leave their island in Lake Superior and move farther west. Omakayas realizes that something so valuable, so important that she never knew she had it in the first place, is in danger: Her home. Her way of life.

The Porcupine Year (2008) has already helped me -- I happened to flip it open to the glossary and learned that n'dawnis means "my daughter." The word was used several times in Four Souls, but if there was a definition, I had forgotten it by the next time I ran across the word. From the dust jacket:


Here follows the story of a most extraordinary year in the life of an Ojibwe family and of a girl named "Omakayas," or Little Frog, who lived a year of flight and adventure, pain and joy, in 1852.

When Omakayas is twelve winters old, she and her family set off on a harrowing journey. They travel by canoe westward from the shores of Lake Superior along the rivers of northern Minnesota, in search of a new home. While the family has prepared well, unexpected danger, enemies, and hardships will push them to the brink of survival. Omakayas continues to learn from the land and the spirits around her, and she discovers that no matter where she is, or how she is living, she has the one thing she needs to carry her through.

Now I discover this: "The Porcupine Year continues Louise Erdrich's celebrated series, which began with The Birchbark House, a National Book Award finalist, and continued with The Game of Silence, winner of the Scott O'Dell Award for Historical Fiction."

I think I'll start with the two picture books.  Don't they look interesting?  I love the look of wonder in the child's face, but also the herd of buffalos in the clouds on the other one.
Posted by Bonnie Jacobs on 8/12/2010 07:48:00 PM
Labels: books