At the opening of Four Souls, Fleur Pillager has left the reservation and is following a trail. First it was rutted paths and deer paths, and then she came to an iron road with "two trails, parallel and slender" (p. 2).  The iron road pictured on the cover leads straight into the story.  Fleur, who took her mother's name of Four Souls for strength in this undertaking, was heading to Minneapolis and St. Paul to find the man who took her land and cut down her trees.

Following the stories of the two narrators of Four Souls was like being in two different worlds.  Nanapush is a trickster figure; he tells Fleur's story while also telling his own.  Pretentious Polly Elizabeth Gheen lives with her sister and wealthy brother-in-law, the lumber baron Fleur is seeking.

Book clubs could find a lot to discuss by reading this book.  Attitudes about human sexuality, including karezza (which I had to look up).  Karezza, I learned, is controlled intercourse or, as one site said, "without the goal of orgasm."  I'm telling you all this because it was an important element in the novel.  Because the wife didn't want to get pregnant (or have sex, for that matter), the husband turns to someone else.  That someone else happens to be Fleur.  Her part of the story deals with what to do about her desire for revenge when the man, John James Mauser, has fathered her son.  Polly, whose sister was Mauser's first wife, is unmarried and wants a child, so she takes care of the baby Fleur and Mauser have.  Yes, it's convoluted.

Two things stand out for me in the book:  Margaret's medicine dress and Margaret's linoleum.  Okay, I hear you asking, "Who's Margaret?"  She's the wife of Nanapush, the foolish old trickster who is one of the narrators.  And then there's the medicine dress.  Think of it as akin to "strong medicine."  Because of it, Nanapush manages to look foolish, again.  The medicine dress is supposed to make things better, and sometimes it does.  Maybe it always does.  This is from Margaret's perspective (p. 176): 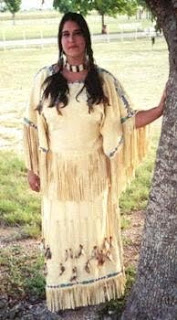 "To sew is to pray. Men don't understand this. They see the whole but they don't see the stitches. They don't see the speech of the creator in the work of the needle. We mend. We women turn things inside out and set things right. We salvage what we can of human garments and piece the rest into blankets.  Sometimes our stitches stutter and slow.  Only a woman's eye can tell. Other times, the tension in the stitches might be too tight because of tears, but only we know what emotion went into the making. Only women can hear the prayer. So the medicine dress wanted me to make it."

And then there's the linoleum.  Margaret gets it into her head that she wants linoleum to replace the dirt floor in their house.  When Nanapush refuses to allow it, she sells Indian land to a white man to buy it anyway.  A drunken Nanapush later solves the little problem of a horsefly bothering him by destroying some of the linoleum in the middle of the floor.  To cover his stupidity, he dreams up an even more ridiculous "solution."  The reader sees that his story can't possibly convince his wife, but -- remember -- he'd been drinking and it made sense to him.  I don't know how Margaret put up with him!