I used to love puzzles. I was visiting my next-door neighbor, back in the 1960s, when she said, "Be right back; I need to put clothes in the dryer." To keep me busy while she moved a load of clothes from one machine to the other, she knocked apart the new Soma Puzzle that was sitting on her kitchen table. A Soma Puzzle is a 3x3 cube, which is "cut up" into seven pieces of different shapes (see above). Anyway, I followed my friend Robin into her laundry room, and we chatted while she got the dryer started. Then she turned to me and said, "I thought you were going to work on that puzzle." She looked a bit odd when I said, "I did." When we went back into the kitchen and she saw the completed puzzle, she confessed, "I've been trying for two days and cannot get that thing back into its cube shape. I have to wait for my sons to come home from school and solve it." I had done it in less than a minute, roughly.

Am I bragging? No, I think some people are born with the ability to "see" things spatially. Others are not. Take my friend Donna, for example. She knows she can't place things in space, including herself. We hadn't known each other long when she warned me, "If I ever insist we should go to the right, go LEFT." I should have listened to her. Once we met in a town halfway between our cities and spent a couple of days getting acquainted. We were on our way back to the motel after dinner in my car when she said, helpfully, "Turn right," and I did. We entered a divided highway and had to drive miles and miles before we could exit and turn back. The way we should have gone, of course, was left. 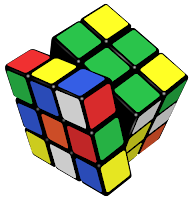 I'm not sure the Rubik's cube is quite the same as the Soma, even though both (in the original Rubik's version, anyway) are 3x3 cubes. I was part of the Rubik's craze back when it first came out in 1974. I needed help to understand a couple of basic things, but after that, the puzzle wasn't that difficult for me.

One day I noticed a cute keychain my teenage son had in his hand. When he let me see it, I was fascinated that it was a working model of Rubik's that was tiny. Tiny! I asked him about it and he said, "I ran across this and got it to give to whoever I find that can solve Rubik's cube the fastest." 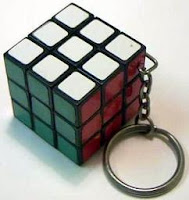 Oh, ho! This was a challenge, of course, and what puzzler can ignore a challenge? The teensy tiny Rubik's cube was stiff and not easy to twist, so I got my own regular-sized version. Did you know that using vaseline makes the parts twist and spin easily? True. So I said, "Time me!" and started working the cube that my son had diligently messed up as thoroughly as he could. Flip, flip, spin, turn, and wham! All done, in 37 seconds flat. Loved that look on my son's face when he said, "Here, Mom," and handed me my new Rubik's keychain.

Today I read about a study that has used computers to figure out every possible Rubik's Cube solution.

"An international team of researchers using computer time lent to them by Google has found every way the popular Rubik's Cube puzzle can be solved, and showed it can always be solved in 20 moves or less."

Oooookie dokie, I can't do that.  Also, according to the article, my time is way off from the best puzzlers.

I used to amuse myself by making patterns on every side of the Rubik's Cube, like putting a contrasting square of color in the center of each side, using the color from the opposite side.  It's been years since I picked up my Rubik's Cube, and I discovered I no longer remember how to do it.  I wonder if this is the usual memory loss of old age or if the anesthesia from my heart surgery erased some of my memory.  Maybe if I had continued to practice solving the Cube every day for the past thirty-odd years it would still be in my memory bank.  What do you think?
Posted by Bonnie Jacobs on 8/13/2010 07:54:00 PM

Ok. You have hit on my huge weakness. I am not good spatially! I have never been able to solve a Rubik's Cube and have no desire to. But, I am totally impressed by those that can. I don't pack a car trunk well either. But, I am really good with directions (perhaps the logicalness of maps appeals to me). Fun post!