The Day After Tomorrow ~ by Whitley Strieber, 2004

The Day After Tomorrow is a story by Roland Emmerich that was first a movie and then a "novilization" by Whitley Strieber.  Here's the synopsis from the back of the book:


It's a fiercely hot summer, so hot that the north pole's heat record is broken by fifty degrees. Massive ice melt stuns the world as open ocean appears at the pole for the first time in living memory. Deep under the Atlantic Ocean, currents crucial to life react, dropping south -- and suddenly, storms of unprecedented ferocity start exploding over the arctic as cold air returns, slamming into the heat with cataclysmic results. The storms grow until they form a bizarre and gigantic blizzard unlike anything ever seen before. A stunned humanity realizes that a second ice age is about to engulf the earth.

Climatologist Jack Hall tried to warn people of the approaching peril -- but it may already be too late for any hope of survival. Now he must not only find a way to reverse the rampant ecological destruction that is transforming the world into a frigid wasteland, but also rescue his rebellious son, who is one of the millions trapped in the icy depths of a frozen New York City.

I found the book on the shelves of our little"library" located just outside the community room of the gated senior community where I live.  People leave books there for anyone to read, and I recently added about a dozen to the collection, myself.  And last night I read The Day After Tomorrow.  Yes, the whole thing. 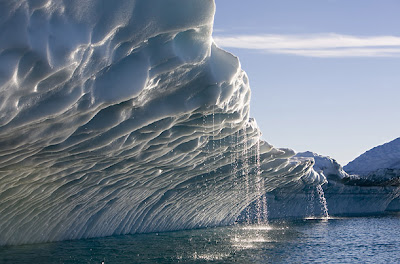 Whether or not this is the way the climate works on our planet (and I think it makes a lot of sense), this story was gripping.  I had to see how it would end.  It starts with the climatologist being unable to make anybody pay attention to his contention that global warming would melt ice at the poles (yep, we are seeing that happen now), which adds massive amounts of fresh water to the oceans.  That scenario causes a change to the Gulf Stream, which moves south, cooling the North Atlantic and, with it, the whole northern hemisphere.

In the novel, it happens.  Suddenly.  And people die.  Those who don't are struggling to survive.  As I said, it's a gripping story.  Do I recommend it?  Oh, yeah!  Because it's happening.  Yesterday's news report says a huge ice sheet, three times the area of Manhattan, has broken from a Greenland glacier.

Sounds like an interesting book. And, I love the photo of the ice! I just saw on CNN's homepage that some huge ice island has separated from Greenland's mainland....