Two days short of a year after the church went up in flames caused by old wiring, St. Elmo United Methodist Church had a groundbreaking ceremony this afternoon.  At the appointed time, some of the crowd went forward to pick up the gold shovels:  the pastor, the district superintendent, our city councilman, and other men of the church.  Someone in the crowd shouted, "There aren't any girls."  After much laughter, because this is a sensitive and inclusive church, people chose Betty Ann Case to go join the men. 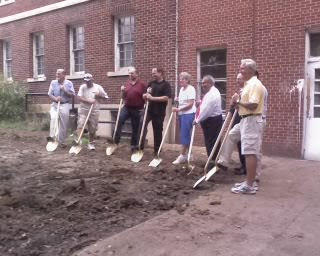 That's the shell of the old building behind them.  The pastor, the Rev. Mark Dowell, is wearing all black.  To his left is Betty Ann Case and to his right is Scott Medley, the organist.  One of the girls standing near me said, "They should have let us do that; we're the young people."  Yes, they are the future of the church.  I told her go pick up a shovel.  She hesitated until I asked Brenda Dowell, the pastor's wife, who told the kids to go ahead and do it.  Three of them are shorter than the shovels they tried to wield. 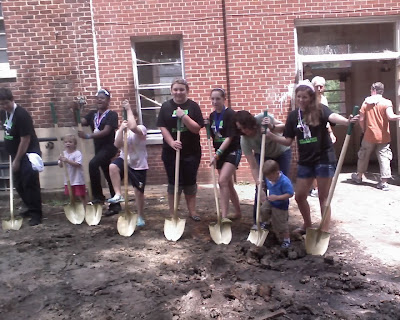 The church celebrated by holding a party at the park down the street, inviting the whole St. Elmo community for food, games, puppets, and music.  Click the blue links to see pictures taken after last year's fire, recent pictures of progress, the plans for the new building, and additional photos of the groundbreaking party.
Posted by Bonnie Jacobs on 8/21/2010 03:46:00 PM
Labels: St. Elmo UMC

Sounds like a great start! That must feel so good for your community

Helen, I've added a link to additional (and better) photos of the day, featuring the playground as well as the "shovel" ceremony: