This morning's cartoon has made me wonder how different my world would have been if I hadn't said "I do" to the man I married. Here are some things that immediately come to mind:

I would have gone to Emory University as an undergraduate, using the scholarship I had won. I was already registered and my roommate was Sandy, who graduated with me from high school. I had intended to go on to medical school after college. Maybe I would now be a physician.

My three children would never have been born. Or at least not as early. (I married at eighteen.) They would probably be different people completely if they had a different father ... or mother! Interesting thought, that they might not have been mine at all. At any rate they wouldn't be who they are today, and neither would I. And that would change the worlds of my in-law children, as well. That also means my grandchildren and great-grandchild would never have been born. It would affect my ex-husband's present wife, too, for that matter, since he would likely never have met my friend.

The changes are escalating, piling up on each other. Additional questions arise: Would I ever have married? Maybe I would have been my generation's old maid Auntie Bonnie, like my mother's sister for whom I was named.

On the other hand, my world would also be very different if I hadn't gotten a divorce. In what ways, I'll never know. For every fork in the road, there was a road not taken. 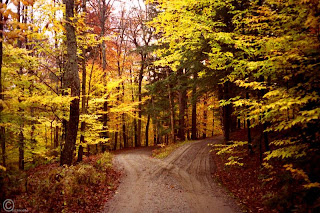 The Road Not Taken
by Robert Frost

Two roads diverged in a yellow wood,
And sorry I could not travel both
And be one traveler, long I stood
And looked down one as far as I could
To where it bent in the undergrowth.

Then took the other, as just as fair,
And having perhaps the better claim,
Because it was grassy and wanted wear;
Though as for that the passing there
Had worn them really about the same.

And both that morning equally lay
In leaves no step had trodden black.
Oh, I kept the first for another day!
Yet knowing how way leads on to way,
I doubted if I should ever come back.

I shall be telling this with a sigh
Somewhere ages and ages hence:
Two roads diverged in a wood, and I—
I took the one less traveled by,
And that has made all the difference.
Posted by Bonnie Jacobs on 10/06/2009 07:58:00 PM

Such somber thoughts but perfect for the night, at least here.

The wouldashouldacoulda thoughts always get you, don't they?

Turning points...we know the big ones, but there are countless little ones too. Always a fascination to think about!