John Bell Hood was a handsome man, 6'2" tall. Before the Civil War in the United States, he led soldiers against the Comanche Indians, but he is remembered as commander of the Battle of Franklin, one of the worst disasters for the Confederate Army. According to Sam Watkins, 1st Tennessee Infantry:


"(Franklin) is the blackest page in the history of the War of the Lost Cause. It was the bloodiest battle of modern times in any war. It was the finishing stroke to the Independence of the Southern Confederacy. I was there. I saw it."

After the war, the McGavock family of Franklin donated two acres near their home to establish a Confederate Cemetery. I read about the battle of Franklin and the burying of the dead in The Widow of the South, an excellent 2005 novel by Robert Hicks. So when I heard that Hicks would be speaking in Chattanooga, I got a copy of his newest novel, A Separate Country, which is about the life of General Hood in New Orleans in the years after the war.

In the new book Hood is haunted by his failures and wants to be vindicated somehow. He married a strong-willed woman, and together they had eleven children in eleven years (some were twins). But always, always Hood was obsessed by what he had done as a leader, in fighting the Comanches and in the battle of Franklin.

"I didn't realize then in my cursed and doomed youth [when he led soldiers against the Comanches], that one killing led to another, geometrically, until the only way possible to escape the massacre was to lead a whole army into the maw and hope for an ending" (p. 159).

"I will send him to see my other creation, not an orphan, but a killer. The killer and the orphan, the Janus face of my life's work" (p. 410).


When I met Robert Hicks on Thursday evening, I asked if Hood had really worried about making orphans and killers. Yes, he did. It's in the writings by Hood that were published. 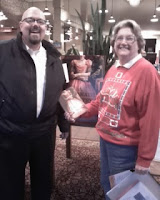 I was interested in his wife, Anna Marie, who had been a genteel artist before they were married. In the book she comes across as a bold person, and I liked her, especially for things like this:


One of the most poignant quotes that I copied from the book came near the beginning. Eli, one of the main characters, is thinking about the Hood family's battle with a different sort of enemy -- yellow fever:


"But the yellow jack had got Anna Marie, and the nine healthy children had been sent off. Hood and Lydia [the oldest child] were all that remained, too sick to leave. They were the ruins of what Hood said was his own separate country. There had been enough Hoods for a country, or at least a small town, but that wasn't what he'd meant and I ain't figured it out" (p. 10).


I recommend both of these books by Robert Hicks. Because his excellent first novel was more compelling to me, I rate The Widow of the South 9 out of 10 and his second novel, A Separate Country, which is also a very good book, 8 of 10.
Posted by Bonnie Jacobs on 10/31/2009 07:43:00 PM
Labels: book review

I have been meaning to read Robert Hicks forever! I did just receive a copy of A Separate Country so hopefully I will be able to do so soon!

As I re-read this review tonight, I was struck by the dustjacket covers on these two books. Hicks mentioned the new cover that evening I heard him speak, saying that the man on the edge of A Separate Country is truly the subject of the book, even though someone must have wanted both books to feature women. The general is hard to see because all you notice is his braided sleeve and his sash.

Personally, I'll be glad when the fad of putting headless women on book covers is over. Why feature a dress on either of these covers?

I've found a painting of the battle of Franklin, along with some information about the battle, here: