It's the in thing 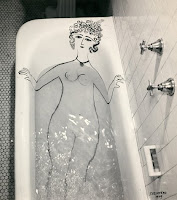 When asked to name four places I have been, I came up with this list:

"In" is such an interesting word. When my friend Margreet was helping me learn a bit of Dutch (she's fluent in eight languages, but Dutch is her native tongue), she made me notice just how slippery some of our little English prepositions can be. For example, the woman drawn on this ceramic bathtub is actually "IN" hot water. But what are we "IN" when we're in love? What are we "IN" when we're in the know? Here are some more "IN" phrases to ponder, not all of which are prepositions:


in debt
in power
in for it
in with
hit in the face with a pie
the in book this year
paid in cash
written in Dutch
in equal parts
a drawing in pen and ink
split in two
a life in theater
in need
in pursuit
wrote in to the editor
closed in
one in three
three in one
stepped in
took in the view
in reference to your letter
what's in this season?
in Indiana, IN means Indiana

Margreet corrected me, saying, "Now you're exaggerating Bonnie. I studied 8 languages, but I am fluent in only 5. Like you, I love wordplay! And by studying other languages you get to know your own language better. The fun just never stops."

When I asked which ones, she told me, "I'm fluent in Dutch, German, French, English and Italian. in addition I studied Latin, Greek and Spanish."

"And, my favorite 'in' word is 'in escrow.' What the heck? And even better, how does one 'fall out' of escrow? What exactly does that look like?"

I just ran across this post again and happened to think of another use of "in" that is my earliest complete memory. My uncle asked my (older) cousin Nancy, "What grade are you in?" She replied, "First grade." I had just turned three, but I remember my total frustration as I thought: How can she be in a "firstgrade" when I can see she is in a room? And I wondered, What's a "firstgrade," any way?

So ... can we be "in" more than one thing at a time? Sure! We can be in love and in hot water and in a small room and in big trouble! What a complicated world we live ... IN.

Additions I wouldn't have thought of last time around:

In memorium
In mourning
In flux...

A friend sent an email with some more "in" words to add to our list:

I have been in many places, but I've never been in Cahoots. Apparently, you can't go alone. You have to be in Cahoots with someone.

I've also never been in Cognito. I hear no one recognizes you there.

I have, however, been in Sane. They don't have an airport; you have to be driven there. I have made several trips there, thanks to my friends, family, and co-workers. I would like to go to Conclusions, but you have to jump, and I'm not too much on physical activity anymore.

I have also been in Doubt. That is a sad place to go, and I try not to visit there too often.

I've been in Flexible, but only when it was very important to stand firm.

Sometimes I'm in Capable, and I go there more often as I'm getting older.

One of my favorite places to be is in Suspense! It really gets the adrenalin flowing and pumps up the old heart! At my age I need all the stimuli I can get!

I may have been in Continent, but I don't remember what country I was in. It's an age thing. They tell me it is very wet and damp there.

Here's an "in" joke I ran across today:

“Where was Moses when the lights went out?”