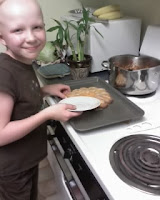 When Cady called to say she and her mom would be at my house in half an hour, I asked whether she'd like to have a sandwich for lunch or spaghetti.

I waited until they arrived so Cady could help me make meatballs and stir spaghetti into the boiling water. While that was cooking, we made a daisy for dessert.

RECIPE FOR A DAISY

Open a package of bake-it-yourself orange danish rolls and separate the round rolls. Then unroll each round into one long strand and cut it in two. Loop one of the halves to make the center of the daisy, then fold each of the other halves into loops that touch the center. It will look like a child's idea of a daisy. Put one or two slices of mandarin orange inside each loop of the daisy, including the one in the center of the flower. (Note: a small can of mandarin orange slices will make two daisies or allow the baker to eat the extra slices herself.) Bake as instructed on the danish package, but watch that you don't let it get too dark. Drizzle the orange icing over the entire daisy while it's still hot. Let the daisy cool before you eat it. 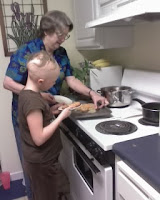 We did. We started with salads (Cady's was nothing but lettuce and bits of cheese, with no dressing), then we had spaghetti and generous helpings of cantaloupe on the side. Cady had seconds and maybe thirds of the cantaloupe, which she loves. Notice Cady's "improvement" on the daisy art form (top photo, above, and slightly visible in the second photo), where Cady put all the extra mandarin orange slices atop the center section. 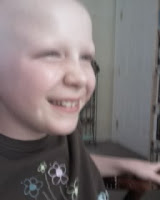 Looks like Cady was pleased with what we produced for lunch, don't you think?

Unfortunately, I didn't think to start taking pictures until time for dessert. Click on the photos to enlarge them so you can see the daisy better, including Cady's orange center, which came out much better than my daughter and I expected.
Posted by Bonnie Jacobs on 10/10/2009 08:17:00 PM
Labels: Cady, family