"Scientists say abrupt and frequent changes in sea temperatures and the death of coral reefs near the islands show that global warming is taking its toll on local sea life."

I was looking for a hook, something to hang today's story on, when I found this article about how global warming is affecting the Galapagos. The first sentence gave me an image that appeals to me:

"Climate change could endanger the unique wildlife of the Galapagos Islands, and scientists are trying to figure out how to protect vulnerable species such as blue-footed boobies and Galapagos Penguins."

Penguins are cute, but I know nothing about blue-footed boobies. So I searched for a photo and found these at Wikipedia. (Click to enlarge photos.) I am fascinated by the blue feet. The blueness of their beaks doesn't show up as well in the picture above, but it's my favorite, maybe because of the ocean in the background. Wikipedia says the feet of these boobies range from a pale turquoise to a deep aquamarine, and the males and younger birds have lighter feet than females do. 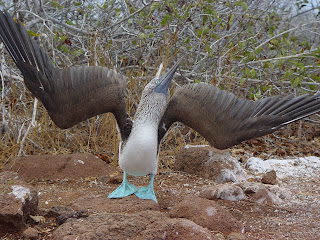 What big beautiful wings you have, sir! This fellow is displaying, or in other words, I'd say he's showing off. Actually, he's probably dancing. 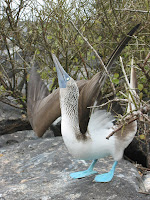 "When mating, the female parades and the male points his head and tail high to the sky and his wings are back to show off to the female. The male blue-footed booby also makes a high-piping whistle noise. Males do a dance to attract the females. The dance includes the males lifting their blue feet high and throwing their heads up."

So what's happening in the Galapagos?

Home for these boobies is a volcanic archipelago, about 600 miles west of the Ecuadorean coast. Islands are particularly vulnerable to climate change, and these islands have coral reefs. "The coral reefs create a habitat; they are like a forest, like the Amazon. They are home to scores of species. ... If the corals die we lose thousands of species that are associated to the coral," said German marine biologist Judith Denkinger, who is based in the Galapagos.

Everything is inter-related. Whatever affects one part of the eco-system affects all the other parts as well. I would hate for us to lose the blue-footed boobies. Or the Galapagos Penguins. Or any other species. Ultimately, that could mean us, the five-toed language-speaking species. We aren't above what happens to our world. We're part of it, and demise of a coral reef or two could affect us more than we now realize.

By the way, this post is part of Blog Action Day. There are more than 7,777 blogs in 140 countries taking part in this today, each posting something about climate change.

On October 24th ordinary folks like you and me will come together in a series of events designed to bring awareness to an important number -- 350 parts per million of carbon dioxide. That's the maximum safe level for carbon in the atmosphere, at least if we want to keep living on this planet. Here are three of those events:

On the melting slopes of Mt. Everest, Pemba Dorje Sherpa, who holds the record for the fastest ascent of the world's highest peak, will be spreading banners and signs.

On the dying coral reefs of the Maldives, the government's entire cabinet will don scuba gear and hold an official underwater meeting to pass a 350 resolution to send to the Copenhagen summit.

On the shores of the fast-drying Dead Sea, Israeli activists will form a giant human "3" on their beach, Palestinians a "5" on theirs, and Jordanians a "0" - reminding us we need to unite on this vital issue.

I know nothing about the state of the coral reef near the Galapagos but did you know that the earth's temperature has not changed in the last 11 years? There are a significant number of climatologists who are now saying we're entering a cooling off cycle.

It's hard to know what's true but I tend to think it's the ultimate human arrogance to think we're going to destroy the planet. We may make it impossible for us to live here but I think the planet will outlast us all.