Write about your childhood 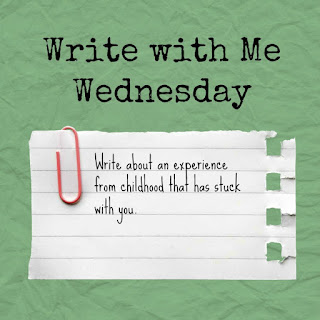 Write about an experience from childhood that has stuck with me?  Okay.  I could combine this with a page from Michelle Obama's 2019 book, Becoming: A Guided Journal for Discovering Your Voice (unpaged):


"Describe your childhood home.   What are some of the details that stand out the most?  What made your home different from your friends' homes?" 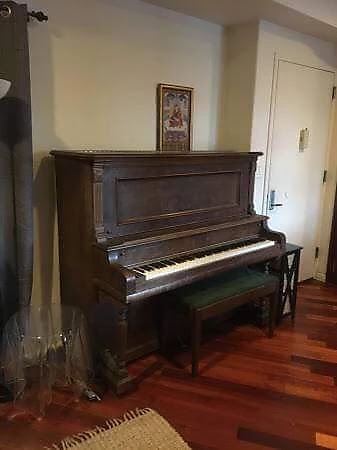 In 1943, we moved into the house my mother grew up in (see the black-and-white photo below, taken about 15 years earlier).  I wrote about my mother's family a couple of weeks ago and used that picture of them in front of their home.  My grandfather Monroe, on the far left, was killed in traffic in 1930, so this may be 1928 or 1929.  My grandmother Inez is standing beside him, with their children lined up according to age:


The four siblings on the back row, left to right, are Chandler, Paul, Bonnie, and Howard.  Coming back from right to left are Mark, Wylee, Mildred (my mother), and Allen beside their mother.

The children grew up and left home, except for my Aunt Bonnie on the back row, who stayed and took care of their mother until she died in 1943.  The rest of them decided Bonnie, who never married, should have their share of the house.  When my parents moved us into that house with her, I was only three years old, but I do remember one thing about that moving day.  I had seen my mother pack my toys and stood watching the movers carrying in the boxes until ... sigh of relief ... I saw my toys being brought up the three steps and across the front porch that's behind my relatives in this picture.  The bricks in this photo weren't quite so visible when I lived there.  My grandmother had a green thumb, and by 1943 there were huge bushes all along the front of the house.  The flowering bushes grew where my uncles stood for that photographer.  The bushes extended all the way to those three porch steps (mentioned above) to the right of what you see here.

Eventually, Bonnie sold the house and moved in with me and my children on Signal Mountain in 1973.  We'd built a basement apartment for my husband's parents, but after we divorced, my mother-in-law chose to move out, even though I assured her I wasn't divorcing HER.  (My father-in-law had died several years earlier.)  Being there after her son moved out was awkward for her, so I understood.  When I invited my mother, it was time for Bonnie to quit living alone, too.  Born in 1904, she was 13 years older than her little sister.  The two of them shared the apartment in my basement, using twin beds that once belonged to Mark's children (the tall brother on the right end).  Those twin beds are probably as old as I am (80 in April), and I sleep on one of them now in St. Louis.  (The mattress is much newer, of course, and I'm ready to replace it again.) 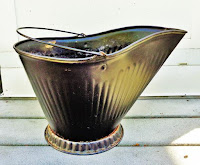 Give details of the home, our instructions say.  I have a hard time imagining how two parents, six sons, and two daughters could live in a two-bedroom house.  Off the living room was a sort of sitting room, so maybe some of them slept there.  I wrote about the living room in January, specifically about the coal stove that vented through the fireplace and the coal shuttle that was beside the stove.  I learned to play the upright piano in that living room, which looked very much like the photo at the top of an antique piano I found online.  There was a dining room open at an angle from the living room, a pantry closet out the other door, and an eat-in-kitchen beyond that.  There was a screened-in porch between the kitchen and one of the bedrooms that I considered a shortcut, at least in the warm months. 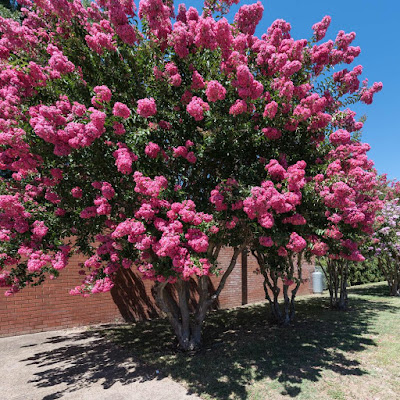 In the side yard, to the left of the automobile parked in the driveway in the black-and-white photo, were lots of growing things.  (Remember, my grandmother had a green thumb.)  I especially remember two large crepe myrtle trees with pink blossoms like these.

In the back yard were a plum tree I could climb, a detached garage with a place to store coal on one side, hyacinths beside my sandbox, a rock garden, a flower bed enclosed by a row of bricks, forsythia ... lots of flowering things planted by my grandmother, in other words.  We moved away from there in 1949, shortly before I turned nine years old.  What I remember best are the growing things and playing that piano.  I still take sheets of music downstairs to one of the two pianos here in the Crown Center and try to remind my fingers how to play.  Would you like to hear a cat play the piano?

I don't remember much about homes of friends.  (I haven't been a child since the 1940s and early 1950s, after all).  But looking back now, I don't remember pianos in the houses of my friends, and I think we had more flowers and flowering trees than anyone else in the neighborhood.  Interesting.
Posted by Bonnie Jacobs on 2/05/2020 12:01:00 AM
Labels: family, piano, Write with Me Wednesday