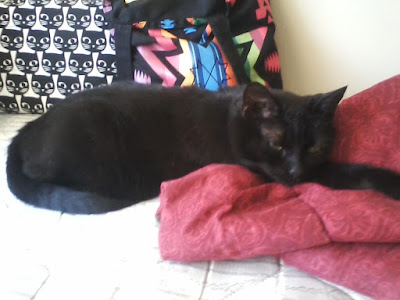 Clawdia has decided she no longer likes her favorite foods.  Former favorite foods, that is.  So rather than eat any of THAT, she'll just starve to death.  That's her above, starving this morning.  She also refused to eat more than a few bites yesterday.  Late in the day she nibbled some of her salmon, and this morning she nibbled a bit of the liver and chicken.  Because those were her favorites, I have lots of them in the cabinet.  But no, she does not like those any more.  Why not?  Because she's a cat.  Because occasionally, I have given her the twice-as-expensive tuna with gourmet gravy and salmon with gourmet gravy.

What's the problem?  Just feed her majesty what she wants.  No, I had only one can left of the tuna with gravy and LOTS of (1) the salmon paté and (2) the liver and chicken paté on the shelf.  I told her she'd just have to starve, if she refused to eat the food we had.  She finally decided to nibble enough of the dried out food on her dish to avoid starvation and finally, after a nearly two-day standoff, she ate most (okay, some) of the last of those two opened cans. 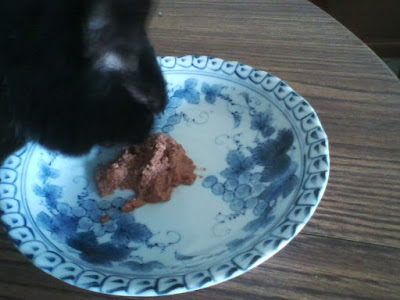 And she got so-so-so-SO excited when she heard me opening another can.  Yes!  It's the last can of the tuna with gourmet gravy.  I put the opened can down near her nose so she could smell it, and what she meowed can be translated as "yes, yes, YES!!!"  Here she is gobbling the tuna.  So now maybe she won't starve after all.  Unless she refuses to eat anything else on the shelf before I shop for groceries again.

By the way, the blue dish has only scattered crumbs left in it as I finish typing up this post.  Yep, she was a very hungry girl.
Posted by Bonnie Jacobs on 2/22/2020 04:00:00 PM
Labels: Caturday, Clawdia

Maybe as her adopted slave, I should contribute half toward her gourmet gravy food. It may be medicinal for her. :-)

Donna Carey = "Maybe as her adopted slave, I should contribute half to her gourmet gravy food. It could have medicinal value."

Bonnie Jacobs = "She would have appreciated you yesterday, when she nearly died of starvation. A battle of wills, it was."

Bonnie Jacobs = "I did. (I think.) She got nothing to eat until she ate at least some of what hadn't dried out sitting there all day. And then she simply got more of the two opened cans of food until they were either eaten or dried out."

Jinger, I knew four years ago Clawdia was a drama queen. I posted this in January 2016:
https://bonniesbooks.blogspot.com/2016/01/clawdia-drama-queen.html

Oh, cats do have their own way of doing things, don't they?!

I am glad she did not starve. The gravy in the expensive food may make it easier to digest