Eva posted a Sunday Salon today that is full of book titles that sound great!  It's all her fault I have added these five books to my TBR list (that means To Be Read, if you didn't already know that). 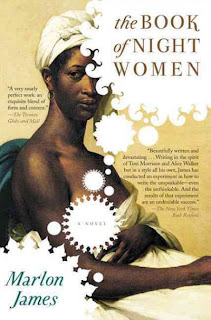 The Book of Night Women ~ by Marlon James, is a 2009 historical novel about a strong slave woman on a Jamaican plantation.  I placed a hold on this one at my library.  Synopsis:


It is the story of Lilith, born into slavery on a Jamaican sugar plantation at the end of the eighteenth century. Even at her birth, the slave women around her recognize a dark power that they—and she—will come to both revere and fear. The Night Women, as they call themselves, have long been plotting a slave revolt, and as Lilith comes of age and reveals the extent of her power, they see her as the key to their plans. But when she begins to understand her own feelings and desires and identity, Lilith starts to push at the edges of what is imaginable for the life of a slave woman in Jamaica, and risks becoming the conspiracy's weak link. 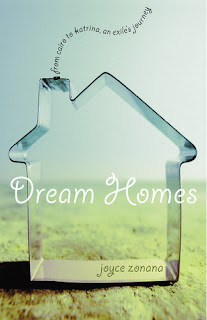 Dream Homes: From Cairo to Katrina, an Exile's Journey ~ by Joyce Zonana, a 2008 memoir.  (Eva:  "When Zonana was a baby, her parents immigrated to the US from Egypt. ... As a child, she never feels quite Jewish since her Sephardic heritage is at odds in a neighbourhood of Ashkenazic Jews.")  This one is not in my library, but looks interesting enough that I may have to buy it.  Synopsis:


A memoir of traditions lost and found, a flooded city, and the healing power of food.  Mark Knoblauch said in a Booklist review:  "Leaving Cairo’s familiar, if chaotic, streets in 1951 for the uncharted territories of America, Zonana finds herself a distinct minority. Even her fellow Brooklyn Jews know nothing about the traditions of Egyptian Jews, a community nearly obliterated in the aftermath of 1948’s Arab-Israeli conflict. Zonana grows up speaking French and English and doting on foods found only in Arab-owned stores. Her father prays daily, but the family neither keeps a kosher home nor observes the Sabbath. A parade of relatives passes through their Brooklyn home, including a grandmother devoted to Arab music unintelligible to the rest of the family. Zonana visits another beloved grandmother in Brazil, a journey that leaves her with indelible memories of the continent and a sense of a large and far-flung family. Eventually, Zonana’s academic gifts yield a professorship in New Orleans in time to endure the rigors of Katrina’s devastations. Zonana makes every human encounter lively." 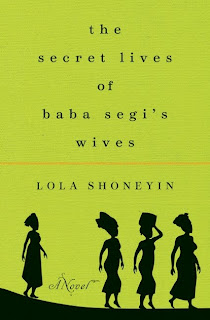 The Secret Lives of Baba Segi’s Wives ~ by Lola Shoneyin, a 2010 novel about modern polygamy, Nigeria.  This one is also on hold for me.  Synopsis:


A plump, vain, and prosperous middle-aged man of robust appetites, Baba Segi is the patriarch of a large household that includes a quartet of wives and seven children. But his desire to possess more just might be his undoing. Babi Segi's fourth and youngest wife, an educated woman who inspires jealousy in her fellow wives, harbors a secret that will expose shocking truths about them all. 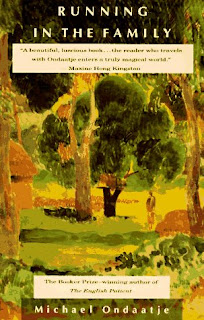 Running in the Family ~ by Michael Ondaatje is his 1982 memoir about Sri Lanka.  (Eva:  "I loved the way that Ondaatje told the stories themselves while also looking at how they can shape us and our identities.")  I put this one on hold at my library.


In the late 1970s Ondaatje returned to his native island of Sri Lanka. As he records his journey through the drug-like heat and intoxicating fragrances of that "pendant off the ear of India, " Ondaatje simultaneously retraces the baroque mythology of his Dutch-Ceylonese family. Mosquito ~ by Roma Tearne is her 2008 novel set in Sri Lanka.  This one is not in my library, so I'll have to decide if I want it enough to buy it.  Synopsis:


Set adrift by the recent death of his wife, Theo Samarajeeva abandons his comfortable writer's life in London and returns to Sri Lanka, his war- torn homeland. There he meets Nulani, a talented and enigmatic young artist. An unorthodox and tenuous love blossoms between this unlikely pair. Nulani finally feels love, and Theo sees hope in his future. But when the insurgency explodes, their precarious world is torn apart. Theo is held captive and stripped of everything he once held dear. Nulani is forced into exile. As the years pass, and the poison of war spreads across this paradise, will their love be lost forever? 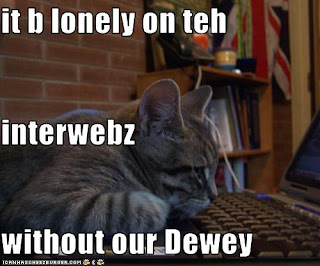 As I look over this list, it occurs to me this sounds like Dewey's lists from reviews she would read every Sunday.  Someone remind me what she called those posts.  (It has been two years this month since she left us so suddenly.  Dewey, I still miss you terribly.)
Posted by Bonnie Jacobs on 11/07/2010 03:09:00 PM
Labels: books, Dewey

Yeah, thanks, Raidergirl. That's what it was. Maybe I should rename this post, or at least start calling posts like this "Sunday Book Coveting" in honor of Dewey. She found lots of great books, didn't she?

Thanks for the shout out!

I miss Dewey bunches. That's the saddest LOLcat ever. :(