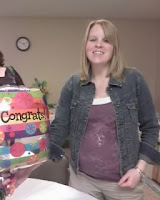 Today I attended a baby shower for my great-grandson, due December 22nd.  I gave him the 3-piece Tigger set I showed you last week.  Here's his mother, feeling oh-so-pregnant, but I didn't mention next month will be lots ... um, nice word? ... MORE.  Yes, that's it.  More girth.  More lumbering around.  More, more, more.  I started with twins and had a son three years later, so she looks mighty small to me. 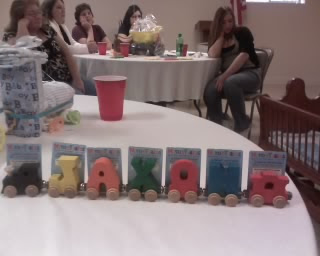 I hope you can read his name on this toy train someone brought to the shower.  I'm sure it will be easier to read when the backing is taken off.  The cars between the engine and the little red caboose spell Jaxon.  I picked his middle name -- for my son, who gave it to his son, who is now passing it on to Jaxon Alan.  I'll post a picture of him as soon as I have one.

Ha!  I just noticed the cradle on the right.  My former husband made it for our grandchildren, and all of them used it except the oldest one.  I think it's about time he gets to use it, for his son.  My other six grandchildren, plus my first great-granddaughter used it.  So did their step-cousins, the two grandchildren of my ex-husband's wife.  It's solid and will last lifetimes because he is a meticulous craftsman.
Posted by Bonnie Jacobs on 11/14/2010 06:06:00 PM
Labels: family, Jaxon

A baby coming is always such fun! And how wonderful that the cradle has been used by so many in the family; I love that kind of stuff!

My granddaughter brought it to the shower, as she was the last to use the cradle -- for her 18-month-old daughter (my first great-grandchild). It's being used by a second generation, though there are not that many years between them, since my youngest grandchild is only ten and she was at today's party.