The Lacuna ~ by Barbara Kingsolver, 2009 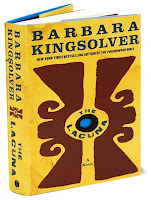 The Lacuna ~ by Barbara Kingsolver, 2009

The synopsis:  "Barbara Kingsolver takes us on an epic journey from the Mexico City of artists Diego Rivera and Frida Kahlo to the America of Pearl Harbor, FDR, and J. Edgar Hoover. The Lacuna is a poignant story of a man pulled between two nations as they invent their modern identities."  The story begins on an island in Mexico, when Harrison Shepherd is a boy.  He finds a cave below the water line.  I was fascinated by the cave called "la lacuna" hidden beneath the waves.  I found two photos to illustrate this quote from page 35, when the boy first found the cave:


Today the cave was gone.  Saturday last, it was there.  Searching the whole rock face below the cliff did not turn it up.  Then the tide came higher and waves crashed too hard to keep looking.  How could a tunnel open in the rock, then close again?  The tide must have been much higher today, and put it too far below the surface to find.  Leandro says the tides are complicated and the rocks on that side are dangerous, to stay over here in the shallow reef.  He wasn't pleased to hear about the cave.  He already knew about it, it is called something alreaedy, la lacuna.  So, not a true discovery.

No, lacuna.  He said it means a different thing from lagoon.  Not a cave exactly but an opening, like a mouth, that swallows things.  He opened his mouth to show.  It goes into the belly of the world.  He says Isla Pixol is full of them.

This photo shows a cenote, defined as "a deep natural well or sinkhole, especially in Central America, formed by the collapse of surface limestone that exposes ground water underneath, and sometimes used by the ancient Mayans for sacrificial offerings."

A lacuna is a gap or missing part, and gaps are important in this book.  A large part of my enjoyment came from that dangerous cave, which I visualized as similar to these photos.  Another example of a lacuna is that people seemed to think they knew Harrison Shepherd because they had read his books (he was an author) or because newspapers reported this or that about him.  At the end of the book, his secretary Mrs. Brown discovered a gap in her knowledge of the man, when she realized she didn't know some important things about him, even though she had worked for him for years and had even traveled with him on business a time or two.  That's the lacuna that matters.

I was really drawn to what Barbara Kingsolver wrote about the McCarthy period.  I remember how uneasy I felt about the televised hearings, even at the age of twelve, when we got our first television in 1952.  I cringed at the thought of Senator Joe McCarthy ruining the lives of so many people, realizing, even then, that there was no way to refute the nebulous charges.  Because Diego Rivera, Frida Kahlo, and Leon Trotsky were "known Communists," being involved with them in any way could be construed as treason in the 1950s.

I've read reviews of The Lacuna by lots of people, including one who thought the author brought in too many famous people.  I think her choices worked the other way around, that she used the fact that Trotsky, Rivera, and Kahlo were all together in one place at the same time and plunked her protagonist (Harrison Shepherd) down in the midst of them.  Because these people were in the book, I looked them up and read more about them, finding Diego's mural in Detroit and his famous mural in Mexico City and discovering Frida's life is now a movie.  I learned some things about these people in depth for the first time, even though I'd heard their names and could have told you a fact or two about Trotsky, the Russian revolutionist.

The story wasn't exciting enough to pull me along, especially in the beginning of the book, but when I reached the last part and the whole thing came together, I was left feeling satisfied.  Rated:  8 of 10, a very good book.
Posted by Bonnie Jacobs on 11/21/2010 05:17:00 PM
Labels: book review

I've had this book sitting on my dresser for some time. It stares at me and when I look back, it seems a bit daunting somehow. I will get to it though!

"Daunting" is a very good word for it, June! I felt the same way and have had the book on my shelf for over a year. I do think you'll find parts of it very worth reading when you get around to it.

Thank you for the excellent review, Bonnie. I've read and enjoyed other Kingsolver books, but like you and June, have felt a bit intimidated by this one. Perhaps I'll be ready to read it by the time it's available at my local library!

I still think about this book. Like you said, the ending really drew it all together. Thanks for sharing your review with me!