Libraries and sailing DO mix

Mornings in Jenin ~ a novel by Susan Abulhawa, 2010


Synopsis:  "Forcibly removed from the ancient village of Ein Hod by the newly formed state of Israel in 1948, the Abulhejas are moved into the Jenin refugee camp. There, exiled from his beloved olive groves, the family patriarch languishes of a broken heart, his eldest son fathers a family and falls victim to an Israeli bullet, and his grandchildren struggle against tragedy toward freedom, peace, and home. This is the Palestinian story, told as never before, through four generations of a single family."


Synopsis:  "Eighty-eight-year old Elva and Courtney, an attractive sixteen-year-old with a severed spinal chord, lie in adjacent beds in a grim Bismarck, North Dakota convalescent home. Ignored by the world, the only resource they have left is their imagination. As Elva and Courtney go on a fantasy trip to Italy (accompanied by Elva's long dead husband and guided by a 1910 travel book), Elva shows Courtney a new way to envision love." 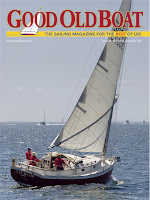 My "loot" today includes three magazines from a librarian.  One day when I was volunteering, he and I talked while working at the check-out desk.  I learned that he had been in the Navy and mentioned my interest in sailing.  I loved my sailboat, a 19-foot Lightning. This nice librarian shares his sailing magazines after he's read them.  Here's one of three I got today.  What great librarians I have.  (Thanks, Greg!)

Library Loot is a weekly meme co-hosted by Claire from The Captive Reader and Marg from The Adventures of an Intrepid Reader that encourages bloggers to share the books they’ve checked out from the library.  Marg has the Mister Linky this week, if you'd like to share the loot you brought home.
Posted by Bonnie Jacobs on 11/17/2010 11:37:00 PM
Labels: books, library loot

I've heard of Mornings in Jenin, it's supposed to be good. Mind's Eye sounds so sad!! I'm sure it's uplifting, but the thought of the circumstances that brought the two of them together is sad. I'll keep an eye out for your thoughts on it!

Mind's Eye sounds like it could be so emotional if well done. And, I loved Mornings in Jenin!

Mornings In Jenin sounds really interesting! I'll have to check it out!