Remembering the Bones ~ by Frances Itani

Although it is not record time for me, I read about Remembering the Bones in Dewey's Book Coveting on Sunday the 13th, put it on hold at my library, picked it up in the next day, and had finished it on January 16th, that Wednesday. Yesterday Dewey wrote her review of the book, reminding me I really should quit reading and start writing reviews for the books I have finished. Like this one. 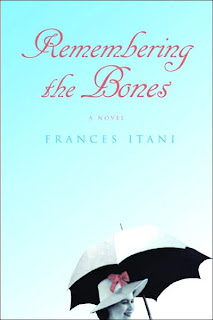 Summarize the book without giving away the ending.
Georgina Danforth Wiley shares the birthday of Queen Elizabeth: April 21, 1926. That's important and the reason Elizabeth has invited her to London to celebrate their 80th birthday in 2006. Georgie, a Canadian, has never been to England and is very excited about meeting Elizabeth, who has been like an unseen friend, living through the same days and years as Georgie. On the way to the airport, Georgie's car crashes into a wooded ravine. She is thrown from the car and is unable to move, but she inches her way toward the car, hoping to honk the horn for help. As Georgina lies helpless, she reflects on her life as daughter, mother, sister, wife, and widow, asking herself what her life has amounted to.

From whose point of view is the story told?
Every bit of it is from Georgie's point of view, as we wonder how and when she will be rescued from the ravine.

Were there any other especially interesting characters?
Georgina married Harry, and they had two children: daughter Case and son Matt. What surprised me was how much Queen Elizabeth was a part of the life of this ordinary Canadian citizen. Georgie had not yet met Lisbet when she packed her bags and left home to fly to England, but she was always comparing their lives.

What did you like most about the book?
I kept thinking about a novel I finished weeks ago (and need to review) called I Never Saw Paris by Harry I. Freund. The protagonist in that book died before he got to Paris, and I kept wondering whether or not Georgie would make it to London.

"I taught Case to love language; I chanted nursery rhymes; I sang, explained words, encouraged her to walk, try, run. And there were diapers strung on the line, rompers to smock, Harry’s cuffs and collars to starch, tea towels to fold, Sunday roasts to cook, cheese biscuits to bake, layer cakes to cool on racks, school concerts to attend. Someone had to do those things" (p. 281).

Okay, I know you are reading this out of context and are probably thinking, "That sounds boring!" Oh, no no no! Don't pick up this book if you are looking for a thriller with car chases, fight scenes, and non-stop action. I've already told you there's a car wreck, but it's what Georgie thinks and does after the accident that makes up the bulk of this story. One more small quote: "Something distracting hovers at the outer edge of memory. Something I can't quite place. My thoughts are slurring" (p. 277). Itani is a good writer, one who can make me know exactly what Georgie was feeling when her thoughts started slurring.

What about the ending?
Now I can't tell you that, can I? No, of course not! Does she make it to the queen's birthday party? I'll never tell.

What do you think will be your lasting impression of this book?
I have to agree with Dewey that "it’s a book that will stick with me for a long time." Most definitely! Georgie’s life may seem pedestrian to some, but the author made the details seem so interesting. I think I could make the case that Georgie was a philosopher, too. Isn’t this a philosophical line? "I amount to my own story. I am what I am."

Our ratings would be just the same, because I was thinking yesterday that if I did ratings as some bloggers do, I would give it a 4.5 out of 5.

I didn't say this in my post, but I think one of my favorite aspects was how different Georgie's life was from my own, because of the time differences. I love that she attended a one room school house! And I love the details about the Danforth farm. My favorite scene was when she and George went to the states for their honeymoon.

Wait, SHE was George (Georgie) and her husband was Harry. And didn't you think it was interesting that HE claimed never to have visited the states?