One in three reported rapes happens
when the victim has been drinking.

I couldn't copy the poster, so you'll have to click to see the dark photo of a woman, beaten and lying in the street.

(1) If one in three had been drinking, then TWO in three had NOT.
(2) On the other hand, THREE in three rape victims had been in the presence of a rapist ... why isn't HE mentioned?
(3) Rape is caused by rapists, not by alcohol and not by women.

Why is the victim being blamed instead of the RAPIST? 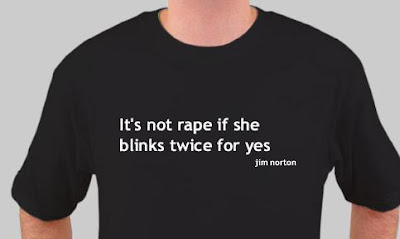 "Male violence is to be considered a ubiquitous, inevitable force; the only way the world can combat it is to put the responsibility on women to not be victims. The flipside of women being responsible for rape prevention is that women are responsible for rape; it’s the usual expressway to victim-blaming."

I got a kick out of two comments to this post:

"I’m waiting for some conservative to propose chastity belts as a solution."
"Chastity belts? How are we gonna get all the men to wear chastiy belts?/snark/"

I think you're not seeing the real intent of the poster, which I didn't see so I could be wrong.

It sounds to me like the type of poster they'd put up around the university where I work. The intent is to warn woman about making themselves vulnerable by getting drunk. Date rape doesn't always occur because someone drugs the victim - it sometimes occurs because women get drunk around the wrong people. They think they're safe, with someone they can trust and they're wrong. And then they compound the problem by not reporting the crime because they wind up feeling responsible - "If only I hadn't gotten that drunk..."

But CJ ... posters directed at women reinforce that women are at fault for drinking too much (or drinking at all), and therefore it's HER OWN FAULT that she was raped.

That's blaming the victim, but rape is NOT the woman's fault. Why not put up posters that tell the men to keep their pants zipped up? Or posters that tell men they don't have the right to rape vulnerable women?

Why not put up posters telling MEN not to drink because then THEY are vulnerable to their weaknesses? Why shouldn't the MEN get the lectures?

Click on "First the poster" (in the first line of this post) and take a look at the offending poster, or copy and paste this:
http://www.knowyourlimits.gov.uk/pdf/AKYL_rape.pdf

Why should the woman be expected to take responsibility for EVERY man's inability to control himself?

Why not teach men to stop being bullies and accept responsibility for their actions?

And hey, "NO" is a simple two-letter word that even a first-grader should be able to understand. So what's wrong with expecting a grown-up man to get it ... and know that when a woman says "NO" it means "NO" ... and that being passed out does NOT mean yes.

What part of "NO" don't they understand?

It is pointless to argue that men are responsible. Of course they are.

You may disagree with the delivery, and as I said, I can't get the poster to load, but the message is valid. A woman is, ultimately, responsible for her own safety. She needs to be aware of all the risks and how to avoid what can be avoided. It is about empowering women to stand up and stop being victims.

Women cannot control a man's behavior. She can, however, reduce the risk by controling her own behavior.

College-aged girls suffer from the belief that they are 'safe' when they party with their 'friends'. the reality, however, is that their 'friends' are young men that they don't know very well. They are young men who may or may not be trustworthy. There is absolutely nothing wrong with pointing out that drinking under such conditions increases their risk.

I have drilled warnings like this into my nieces heads. I started when they were in HS. I still harp on it. I want them to be aware and I desperately want them to be safe. I am, unfortunately, in a job where I cannot pretend that they are. No college campus is safe.

Ranting about how it should be the men who get the lectures does nothing to help keep them safe. There is not a man alive who does not know that sexual assault is a crime. Lecturing them is pointless. And, btw, they do get lectured. They do attend seminars and discussion groups and the like. It is naive to think that a man who has it in him to sexually assault a woman is going to be swayed by a lecture or a poster.

So, as you can tell, this is a hot button issue with me. I understand your viewpoint and I totally agree with it. Women should not have to worry about things like this. In a perfect world we wouldn't have to. But, this world isn't perfect and the men are not going to change. It is up to us to protect ourselves. And I will never stop preaching to the female students on my campus that there are things they can do to limit their risk.

Thank you, CJ. No, really, I mean it. Yes, of course I'm arguing from emotion ... and so are you. I have one granddaughter in college, and the next one will be going to college this fall. Six of my seven grandkids are in their teens and early twenties. I agree that the girls should do all they can to prevent getting into dangerous situations.

Thank you also for the job you do, especially having to deal with the ugly side of the work. I know that is not easy for you. I have also dealt with the victims, though I am now retired.

The good thing about our discussion here is that everyone who reads it will know that we are both passionate about this issue ... and reading posts (and comments) about rape can only heighten awareness for both women and men.

So thank you for taking the time to make your reasoned argument. Maybe we will have helped at least one person by speaking out.

(That poster from Great Britain features the words I shared: "One in three reported rapes happens when the victim has been drinking." The black-and-white photo shows a badly bruised and crying woman lying on the ground, but the designer intended for the bold white words to be the most prominent part of the poster.)

Thank you for raising awareness of this very important issue. It's obvious both you and CJ feel passionately about this. I'm glad you do, it makes me feel safer. I know a few women who have been victims of rape. It is devastating. I don't think you ever quite get over it. My heart aches for every woman who has been raped. If I had one wish it would be that it would never happen again. To anyone.