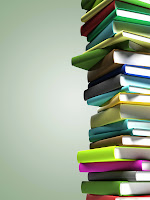 This week's loot from the library includes a book recommended by Dewey two years ago and a children's book.  Both are perfect for the Women Unbound reading challenge, which ends on Tuesday.

Dewey rarely kept books she had read.  If they belonged to her, she would give them away or "bookmooch" them.  This is one she planned to keep and reread "soon."


"When her corgis stray into a mobile library parked near Buckingham Palace, the Queen feels duty-bound to borrow a book.  Discovering the joy of reading widely (from J. R. Ackerley, Jean Genet, and Ivy Compton-Burnett to the classics) and intelligently, she finds that her view of the world changes dramatically.  Abetted in her newfound obsession by Norman, a young man from the royal kitchens, the Queen comes to question the prescribed order of the world and loses patience with the outines of her role as monarch.  Her new passion for reading initially alarms the palace staff, and soon leads to surprising and very funny consequences for the country at large." -- from the dustjacket

Having already finished this small book (120 pages), I'll seque into a book review.  Dewey finished it the same evening she bought it, and I understand why she wanted to read it again.  On turning eighty, the Queen observes, "At eighty things do not occur; they recur."  But the queen does new things in this story, things neither she nor others would ever have suspected she was likely to do.  Is it okay to change when we are older?  Or is that suspect?


"It could have been a syllogism, if Gerald had known what a syllogism was:  Alzheimer's is common; the Queen is not common; therefore the Queen has not got Alzheimer's.  Nor had she, of course, and in fact her faculties had never been sharper..." (p. 82).

The Queen had changed her thinking.  Even one page from the end of the book, I would not have expected her to ... Ah, but I can't tell you that, can I?  Perhaps I can say the Queen, in spite of her life-long habits and obligations, became rather unshackled, making her perfect for the Women Unbound reading challenge.  Such a little gem of a book.  Such a fun, quick read.  Rated:  8 of 10, a very good book. 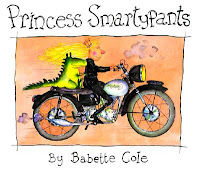 
"Princess Smartypants doesn't want to get married. She enjoys being a Ms. and she wants to live in the castle with her pets and do exactly as she pleases. Because she is very pretty and very rich, all the princes want her to be their Mrs. So Princess Smartypants has to think up some very clever ways of dealing with unwanted suitors in this hilarious fairy-tale-with-a-difference." -- from the dustjacket

It's a children's picture book, so of course I read it in one gulp. This little princess is different.  How many princesses have you read about who ride motorcycles, for example?  Crowds of royals are shown outside the castle in horse-drawn carriages, on camels, and in limousines -- I love the illustrations and the names of those young princes.


Suitors were always turning up at the castle making a nuisance of themselves.

"Right," declared Princess Smartypants, "whoever can accomplish the tasks that I set will, as they say, win my hand."

I hope you readers are all adults and won't be horrified if I share a "spoiler" about the book  She assigns each one an impossible task.  Most of the fellows are easily dissuaded when they fail, but Prince Swashbuckle manages to do everything she had asked of ALL the other princes, the whole list.  I thought she would, thus, have to fall in love with him or something like that.  Nope, she gave him a magic kiss and turned him into a gigantic warty toad.  He left in a huff, and Princess Smartypants got what she wanted.  This book, like the one above, is also perfect for the Women Unbound reading challenge.  I recommend it highly to feminist readers and little girls everywhere who dream of being princesses.  Rated:  8 of 10, a very good book.

Library Loot is a weekly meme co-hosted by Claire from The Captive Reader and Marg from The Adventures of an Intrepid Reader that encourages bloggers to share the books they’ve checked out from the library.  Claire has the Mister Linky this week, if you'd like to share a list of the loot you brought home.
Posted by Bonnie Jacobs on 11/28/2010 12:01:00 AM
Labels: book review, library loot, women unbound

Both books sound so interesting! I love children's books that go against the norm. One of my favorites is the Paperbag Princess where the princess is the strong one and doesn't marry the goofy prince in the end

I was disappointed my library didn't have Paperbag Princess, but decided to look at an online bookstore for it. That's when I discovered it's spelled differently.

The Paper Bag Princess by Robert N. Munsch --- Princess Elizabeth is to marry Prince Ronald when a dragon attacks the castle and kidnaps Ronald. In resourceful and humorous fashion, Elizabeth finds the dragon and rescues Ronald --- who is less than pleased at her un-princess-like appearance.

I have this on my TBR shelf and hope to read it soon. It's short enough to be more of a short story and should be a quick read. I think it's great that Dewey passed on her books that way. I do the same and I share them with my blog readers, friends, and through Paperbackswap.

Bonnie, I think someone said The Uncommon Reader is a novella. It's more than a short story, but it reads fast.

Princess Smartypants sounds like something my niece would enjoy!

I loved The Uncommon Reader. :)

Like everyone else, I loved The Uncommon Reader. Also, I have to second Helen's recommendation of The Paper Bag Princess. You can never go wrong with Munsch!

I picked up The Paper Bag Princess from my library today. Thanks, Helen and Claire. What a cute story! I'll need to review it soon.