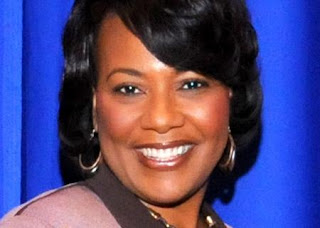 On Friday, I went to hear the Rev. Bernice A. King, youngest child of civil rights leaders Martin Luther King Jr. and Coretta Scott King.  She shared her own inspirational story and introduced her mother's book.

My Life, My Love, My Legacy ~ by Coretta Scott King, as told to the Rev. Dr. Barbara Reynolds, 2017, autobiography


The life story of Coretta Scott King (1927-2006) — wife of Martin Luther King Jr. and founder of the Martin Luther King Jr. Center for Nonviolent Social Change (The King Center) — as told fully for the first time, toward the end of her life, to the Rev. Dr. Barbara Reynolds.  As a widow and single mother of four, she worked tirelessly to found and develop The King Center as a citadel for world peace, lobbied for fifteen years for the US national holiday in honor of her husband, championed for women's, workers’ and gay rights, and was a powerful international voice for nonviolence, freedom, and human dignity.  Coretta’s is a love story, a family saga, and the memoir of an extraordinary black woman in twentieth-century America, a brave leader who, in the face of terrorism and violent hatred, stood committed, proud, forgiving, nonviolent, and hopeful all of her life.

I left at the end of the evening with this thought about nonviolence:

Violence is holistic; it's how we think as
well as how we act.  It's a way of life.

We must act.  Take action.  That fits with this line from Chapter 1 of Bernice's own 1997 book Hard Questions, Heart Answers:


"We must do more than honor a man of this magnitude with just a holiday; we must honor him with action." 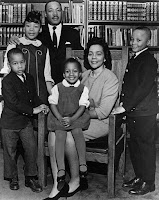 I learned that Bernice King graduated from the same seminary I did — Candler School of Theology at Emory University in Atlanta — but three years after I did.  Apparently, she started in the fall of 1987 after I graduated that spring.  I wish her the best in her ministry and in her role as the CEO of The King Center as she continues to uphold her parents' legacy of nonviolence, social justice, and racial equality.

Bloggers gather in the Sunday Salon — at separate computers in different time zones — to talk about our lives and our reading.
Posted by Bonnie Jacobs on 1/29/2017 02:00:00 PM
Labels: salon

I like the quote/idea that nonviolence isn't just about how we act, but how we are. I've just recently read John Lewis' books March and nonviolent protest is such a huge part of that story