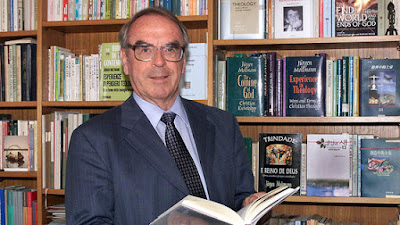 Moltmann's major works began with his trilogy (ET = English Translation):
He wrote in the Preface to The Trinity and the Kingdom (1980; ET 1981):


"What I should like to do now is to present a series of systematic contributions to theology, differing from my earlier books in a number of ways.  Here I should like to consider the context and correlations of important concepts and doctrines of Christian theology in a particular systematic sequence" (p. xi).

Moltmann wants to widen the discussion, saying we must dialogue with men and women of the past and with people beyond our own little group:


"What we call 'tradition' is not a treasury of dead truths, which are simply at our disposal.  It is the necessary and vitally continuing theological conversation with men and women of the past, across the ages, in the direction of our common future. ... We can no longer limit ourselves merely to discussions with our own tradition without being quite simply 'limited.'  As far as is humanly possible, we must take account of the other Christian traditions, and offer our own tradition as a contribution to the wider ecumenical community" (p. xii).

We have a common future, and I want to reach beyond any one religion so that we may embrace that future together.  Moltmann is ahead of me.  Quoting from the same book's preface, again:


"I have been particularly concerned to bring Judaism and the testimonies of the biblical Jewish faith into the discussion with the biblical Christian faith" (p. xv).

For now, let me simply list his seven systematic contributions to theology:
Eight of the ten books itemized above are represented in Jürgen Moltmann: Collected Readings (2014) edited by Margaret Kohl, who translated many of Moltmann's volumes.  I plan to read chapters from that book as I begin each volume.  Based on the Moltmanniac's recommendation, however, I'll start my study with Moltmann's latest book.

His most recent work, The Living God and the Fullness of Life, is an excellent place to start even if you have no background in theological thinking.

Completing the work of three degrees in theology means I'm not a beginner, but it seems like a quick overview for me.  Then I'll dig into his trilogy, followed by his systematic contributions to theology.  When I do all that, then I'll decide whether this is the year I want to read or re-read all his other books I've collected.
Posted by Bonnie Jacobs on 1/02/2017 08:30:00 PM
Labels: Moltmann, Mondays with Moltmann