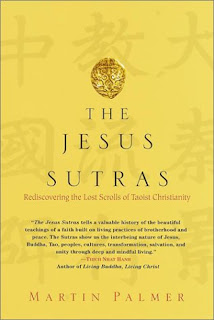 
In 1907, explorers discovered a vast treasure trove of ancient scrolls, silk paintings, and artifacts dating from the 5th to 11th centuries A.D. in a long-sealed cave in a remote region of China.  Among them, written in Chinese, were scrolls that recounted a history of Jesus' life and teachings in beautiful Taoist concepts and imagery that were unknown in the West.  These writings told a story of Christianity that was by turns unique and disturbing, hopeful and uplifting.  The best way to describe them is collectively, with a term they themselves use:  The Jesus Sutras.

The origins of Christianity seem rooted in Western civilization, but amazingly, an ancient, largely unknown branch of Christian belief evolved in the East.  Eminent theologian and Chinese scholar Martin Palmer provides the first popular history and translation of the sect's long-lost scriptures — all of them more than a thousand years old and comparable in significance to the Dead Sea Scrolls.  Gathered, deciphered, and interpreted by a team of expert linguists and scholars, these sacred texts present an inspiring use of Jesus' teachings and life within Eastern practices and meditations — and provide an extraordinary window into an intriguing, profoundly gentler, more spiritual Christianity than existed in Europe or Asia at the time, or, indeed, even today.

Palmer has devoted more than a decade to seeking the extant writings and other evidence of this lost religion.  His determined search eventually led him to rediscover one of the earliest Christian monasteries.  At the site was an  8th century pagoda still intact.  Within it Palmer and his team found more evidence, including statues, underground passageways, and artifacts, that helped them uncover and re-create the era and rituals of the Taoist Christians.

The Taoist Christians, who wrote the Jesus Sutras recognized equality of the sexes, preached against slavery, and practiced nonviolence toward all forms of life.  In particular, this tradition offered its followers a more hopeful vision of life on earth and after death than the dominant Eastern religions, teaching that Jesus had broken the wheel of karma and its consequent punishing, endless reincarnations.

Vividly re-creating the turbulence of a distant age that is remarkably evocative of our own times, Palmer reveals an extraordinary evolution of spiritual thought that spans centuries.  A thrilling modern quest that is also an ancient religious odyssey, The Jesus Sutras shares a revolutionary discovery with profound historical implications — imparting timeless messages and lessons for men and women of all backgrounds and faiths.

That long description is from the dust jacket, and I also like this quote from Thich Nhat Hanh on the front cover:


"The Jesus Sutras tells a valuable history of the beautiful teachings of a faith built on living practices of brotherhood and peace.  The Sutras show us the interbeing nature of Jesus, Buddha, Tao, people, cultures, transformation, salvation, and unity through deep and mindful living."

Library Loot is a weekly event co-hosted by Claire @ The Captive Reader and Linda @ Silly Little Mischief that encourages us to share the names of books we checked out of the library, but Claire hasn't posted a Mr. Linky this week.
Posted by Bonnie Jacobs on 1/25/2017 09:00:00 PM
Labels: hope, library loot