Beginning ~ in a hotel room 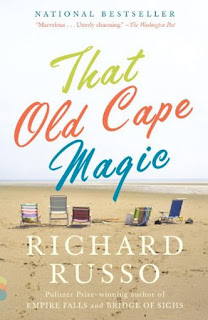 
"Though the digital clock on the bedside table in his hotel room read 5:17, Jack Griffin, suddenly wide awake, knew he wouldn't be able to get back to sleep."

I got this novel from the Crown Center library.  It's a duplicate copy, so Donna and I culled it to be donated.  I'll read it first.  A summary:


For Griffin, all paths, all memories, converge at Cape Cod.  The Cape is where he took his childhood summer vacations, where he and his wife, Joy, honeymooned, where they decided he’d leave his LA screenwriting job to become a college professor, and where they celebrated the marriage of their daughter Laura’s best friend.  But when their beloved Laura’s wedding takes place a year later, Griffin is caught between chauffeuring his mother’s and father’s ashes in two urns and contending with Joy and her large, unruly family.  Both he and she have also brought dates along.  How in the world could this have happened?  It's about marriage, family, and all the other ties that bind.

I really like that cover - if only it wasn't January . :)

I have fond memories of Cape Cod and somehow this description, though nothing like my life, seems to fit the Cape :-)