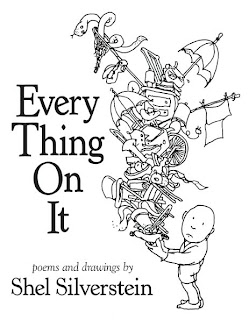 Every Thing On It: Poems and Drawings ~ by Shel Silverstein, 2011

Although Shel Silverstein died in 1999, his family chose 145 of his poems with drawings which had never had a chance to be published.  And this book hit store shelves today!  NPR's staff tells us how the book of "funny, poignant and naughty" poems came together:  Shel Silverstein's Poems Live On In Every Thing.  You can also read five of the new poems on that page.

I'm excited because I have two of Shel Silverstein's books checked out of my library to write about during Banned Book Week, which starts on Saturday.  And here's one more treat for you:

Shel Silverstein really was so very good, that's exciting that there is one more book of unpublished stuff to delete another generation!

I'm gonna assume you mean "DELIGHT" another generation, since I don't think you want to delete them ... LOL.

This is great! I have been hearing about it lately and wouldn't mind giving it a read at some point!

Ooh, neat!! I didn't realize this was coming out, but I'll definitely need to get my hands on a copy. Great choice for Banned Books Week!

Erin, since this new book just came out on Tuesday, I doubt if it's had time yet to be banned or challenged. The two books of his that I have from the library to read for Banned Books Week are Falling Up and A Light in the Attic.