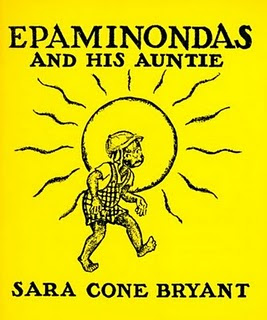 A child can feel good about knowing (or understanding) something when the child in the story just doesn't get it.  Every time Auntie gives Epaminondas something to take home, he messes up.  The cake she sent with him arrives in crumbs, and Mammy tells him he should have brought it home under his cap.  Next time, it's butter and it's a hot day, but Epaminondas remembers and puts it under his cap.  See the buttery yellow cover?  That's butter melting all down his face and neck.  Mammy says he should have dipped the butter in the water to cool it, but the next thing he brings home from Auntie's is a puppy-dog, almost drowned (more than "almost" in the original).  Should have tied a string around its neck and come along home, says Mammy.  So imagine the loaf of bread he brings next.  Mammy gives up and says to him,

Should the language be changed to make the mother sound more educated?  No, of course not.  The language is colorful, and changing it makes the book lose its appeal, in my opinion, though many have tried.  "You ain't got the sense you was born with" sounds more like something his mama would say than "You don't have the sense you were born with."  This is especially true at the end of the book where the instructions to Epaminondas must be phrased in a way that leaves the kind of ambiguity that "allows" him to step on the six mince pies left to cool off while Mammy goes to visit Auntie herself.  I wasn't happy with the original version, back in my childhood days:


"Well, now, you hear me, Epaminondas, you be careful how you step on those pies."

I never, ever thought that sounded like anything an adult would say to me. It was that word "how" that didn't work for me. And this is "how" Epaminondas did it: 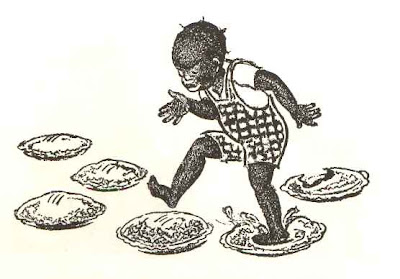 This book has been rewritten many times, including this version where, to eliminate the charge of racism, the main character becomes a possum. 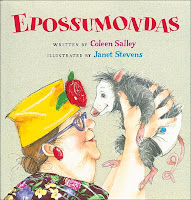 This is a retelling of the Epanimondas story. That same section of the book goes like this:

That word "truck" in the mouth of a modern woman talking to a diapered possum just "ain't" right. But the 21st-century author did phrase the final instructions in a way that's more logical to our ears:


"Well, Epossumondas, you be careful about stepping on those pies!"

Yes, we realize immediately what going to happen, even with these bland words.  Being careful "about stepping on those pies" works better for me than being careful "how you step on those pies."  But still, this one doesn't grab me like the original, which has more character.  I don't relate to the silly little possum, but I could imagine myself responding to instructions from my own mother, just as the little boy Epaminondas did.

The boy's struggles to do the right thing endeared him to me, in a way holding an opposum does not.  When I was a child, I thought like a child.  Would I have misunderstood the way Epaminondas did?  No! ... so I could feel good about myself.  Would I have known what my mother meant?  Yes! ... so I could feel good that I was a big girl who could understand instructions.  I wouldn't have related to a possum wearing a diaper.  No, I was too big for that. 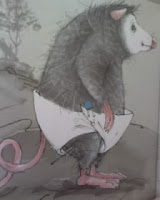 Back to Epaminondas and His Auntie:


According to Intellectual Freedom in Libraries: Then and Now, access to library materials was restricted in response to an objection by the San Jose, California branch of the NAACP claiming that this book depicts a black child as “completely idiotic and stupid.”

Epaminondas isn't stupid.  He isn't an idiot.  He's a little boy trying very hard to get it right.  It's the adults who aren't thinking clearly.  His Auntie could have been more specific, if only she had known how badly the poor guy was struggling to do the right thing ... just as I did, when I was a child.  He was doing exactly as he was told, poor fellow.

Best comment I found online was written by Jan Zehr in 2003.


I credit "Epaminondas and His Auntie" with my ability to think critically. I am an entrepreneur have employed many people. The single, biggest problem in today's work force is the lack of ability to think critically. When given an instruction, if it is remembered(!), that instruction is construed to mean applicable in EVERY instance. Epaminondas is the condition of too many people today.

I compare "Epaminondas and His Auntie" with Aesops Fables. I do NOT think that because a character is black it is bad. Does everyone need to be white? Let's rewrite "Epaminondas" in every color and every language. It was a definitive book in my childhood.  Jan Zehr

I still love the book, having re-read it for the ten millionth time before writing this post.  I rate it 10 of 10, because I still can't put it down.

I have heard versions of that story in many forms and I always assumed it was a child being literal and that it was cute and funny. How does making the child an animal improve things? :-)

Anita, in my review of Little Black Sambo, I pointed out that the original child is from India and the book wasn't racist until someone in the mid-20th century changed the drawings.

I loved this book as a child. I am 68 and firm Yorkshire many old people I knew only spoke the dialect in those days so the language in this book didn't worry me. And truck was a word in use. I call my husband Epaminondas because he is hopeless in domestic situations and only does what he is told to do without applying thought or sense.
I never felt this book to be racist. Just a small child and his mum and auntie.