Beginning ~ in the shade of an apple tree


A nude couple is standing in the shade of a small, leafy tree.  The quality of the filtered light on their bare skin attracts me, and I stand with them to enjoy the dappled shade.  Through pinholes formed where leaves cross, the sunlight creates globules of brightness on the grass.  My bare toes nudge inside one of those softly defined orbs, but then I remember to look up.

From the sky, at the rate of 12.2 feet per second per second, a grand piano is hurtling down like a huge black bird of prey over our upturned faces.  In that moment is a beginning and an end, alpha and omega, Genesis and Revelation.

Because we always ask, like any logical child, "Yes, but what came before the beginning and after the end?" I start with the year 2017, three years before I fell into Adam's world and lived with him in the shade of an apple tree.

Just as intriguing, the chapter is entitled "When the piano falls."  This is a great beginning, and it made me set aside the book I had started earlier the day I bought this one.  That's the "book beginnings" part of this post, so on to my review.  Here's a summary I found online:


By decoding light from space Lucy Bergmann’s astrophysicist husband discovers the existence of extraterrestrial life, and anthropologist Pierre Saad unearths from the sands of Egypt an ancient alternative version of the Book of Genesis. To religious fanatics, these discoveries have the power to rock the foundations of their faith. Entrusted to deliver this revolutionary news to both the scientific and religious communities, Lucy becomes the target of Perpetuity, a secret society. When her small plane crashes, Lucy finds herself in a place called Eden with an American soldier named Adam, whose quest for both spiritual and carnal knowledge has driven him to madness. 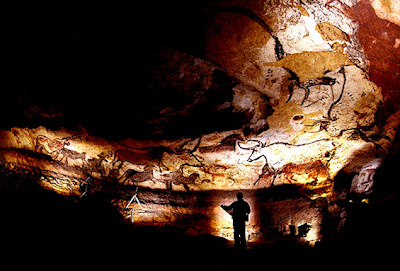 The "Adam and Eve" part of the story takes place in "Mesopotamia," which is Iraq, more or less.  That section seems almost like a fairy tale, except for the occasional airplane that flies over or the pilot who crashes there.  The best part of the story takes place in France, where the earliest cave drawings were discovered.  I enjoyed the mystery of the drawings more than the bad guys chasing the good guys.

"Suspension of disbelief," so necessary to the enjoyment of a novel (as I learned in college), became more and more difficult.  For example, I found these words bizarre, coming from the mouth of a farmer's son who, before that point in the book, had acted rather like a simpleton:


"Throughout my youth, my difficult youth, the chief imperative was to escape the domination of my father" (p. 285).

At that point, I actually put down the book and walked away from it, though I went back later.  Having read 285 pages, after all, I wanted to see how the book ended.  When I started writing this post, I found a couple of others who agree with me.  I ran across this at Bippity Boppity Book and said, "Yes!"


"Adam is dumped off here.  Lucy crashes here.  Another soldier ends up crashing here.  What is this place?  The Bermuda Triangle of the Middle East?"

I laughed when I found these words in a New York Times book review.  My feelings exactly (see above).


Imagine a farmboy-turned-soldier from Idaho saying, “Throughout my youth, my difficult youth, the chief imperative was to escape the domination of my father.”

Odd that it was the same sentence that tripped that reviewer and me.  And now, one complaint about symbols.  That ampersand (&) in the title has been a problem every time I've written about this book (here, here, and in this post).  For some esoteric reason known only to computer geeks, Blogger's program keeps changing it to & followed by amp with a colon.  I've deleted amp; repeatedly.  I'd quit using that symbol and simply write out the word "and" except that the author says about that ampersand,


"I've done that on purpose because I want to suggest that this is a modern take on the old story of Genesis."

By the way, I never did figure out who watched "the nude couple" and looked up to see a piano "hurtling down ... over our upturned faces."  Yes, I know it says, "I fell into Adam's world and lived with him in the shade of an apple tree."  But I'm still confused.  I also can't figure out how, while flying from Egypt to France, someone could crash in Iraq (or Mesopotamia).  Maps, anyone?
Even though several things about this book frustrated me, I still think it was a very good book and rate it 8 of 10. 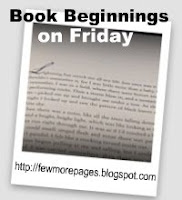 If you want to play along, this meme is hosted by Katy at A Few More Pages. Share the first sentence or two of the book you are reading. (Sometimes it takes several sentences to get the full thought.) Then, share your impressions of that beginning.  Click this link to see what others say about the books they are reading this week.
Posted by Bonnie Jacobs on 9/23/2011 03:01:00 PM
Labels: book beginnings, book review

Definitely not a book I'd read, but I am super impressed that you went 285 pages in when you weren't really sure of it!

Naslund usually does a much better job. I was 285 pages in when I got totally frustrated, but I did go on to finish the whole book.

I don't like it when I'm left confused by a book. It does sound intriguing though!

Thanks for participating in Book Beginnings!