A church expansion (and a blogiversary) 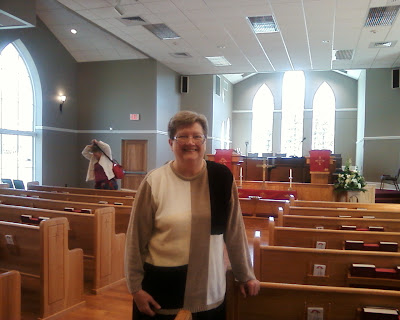 Signal Mountain United Methodist Church, where I served as pastor from 1992 to 2002, is growing in numbers and in size.  Ten adults with seven or eight children came forward at the close of today's service, after we consecrated the new sanctuary.  This expansion more than tripled the size of the building, adding 8,600 square feet to bring the total to 12,560 square feet.  I'm standing beside pews that came from the former sanctuary.

The church was organized in the log home of John Robinette in 1857 and erected its first building nearby in 1870.  William Kell, who is currently the oldest member and the one who has been a member the longest, worshiped in that 1870 building.  When the church moved to the current location in 1948, he laid some of the wooden flooring of the sanctuary.  This morning a quartet honored Bill Kell by singing "Swing Low, Sweet Chariot," a song he had chosen.  Former pastors were invited back, and  I was asked to give the benediction.  This is what I said, more or less:


"As we consecrate ourselves anew to the worship and service of God in this new place, may we be so filled with the love of God that we will always love as God loves."

It was fun seeing all the folks again, especially those who were children when I was their pastor, who are now adults. And it was sad that many have died since I left. Here's a photo from the newer parking lot, after the reception and after most people had left. 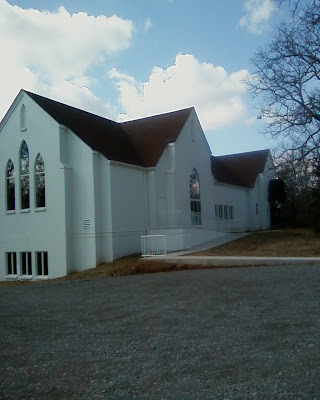 I've been blogging for four years now, since I wrote about The Namesake by Jhumpa Lahiri on January 30, 2007.  In 2008, I missed my blogiversary by a day.  In 2009, I missed it totally because I was sick enough to require open-heart surgery.  In 2010, I nailed the day with a blogiversary post.  And this morning I drove up a mountain thinking I have two things to write about today:  four years of blogging and consecration of the expanded church building.
Posted by Bonnie Jacobs on 1/30/2011 07:08:00 PM
Labels: blogiversary, Signal Mountain UMC

Happy 4th Blogoversary! Four years is so long; it's great that you are healthy and on time this year :-)

Happy Anniversary and congrats on the new church.

Congratulations Bonnie! On the blogiversary and the new sanctuary. Both you and the new church look great! Are you still teaching?

No, Susan, the semester ended before Christmas and I don't plan to EVER teach Developmental Writing again. On the other hand, I'll always be teaching something, even if it isn't at Chattanooga State. For instance, I'll be leading a women's weekend retreat in the near future.