Just teasing ~ but freedom is no joke 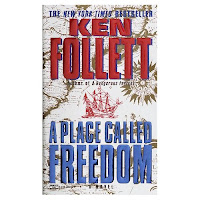 
"She knew she ought to leave.  Only trouble could result from her staying here and watching a naked man swim the river.  Nevertheless her curiosity was too much for her, and she stood motionless, seeing his head move slantwise across the torrent at a steady speed.  The strong current forced him into a diagonal course, but his pace did not falter; he seemed strong.  He would reach the near bank at a point twenty or thirty yards upstream from where Lizzie stood."

This novel was standing on my shelf beside Follett's The Pillars of the Earth, a chunkster (973 pages) I had decided to start reading that evening.  A Place Called Freedom is a considerably smaller mass market paperback (only 437 pages) that I'd seen mentioned favorably on several blogs lately.  You can guess which one I picked up.  Ken Follett mentions that same scene on his web site:


"Hidden by a Scottish river bank in the winter of 1767, Lizzie Hallim watches a naked figure emerging from the icy water. Mack McAsh is a slave and Lizzie is helping him escape. Mack challenges the mighty Jamisson family, which enslaves whole families to work their mine. Mack soon finds himself wrongly sentenced to death. Rescued from hanging, he is transported to America, where he continues to struggle for freedom."

Follett says, "It blows my mind to think of the sheer nerve of eighteenth-century pioneers who went to America in tiny boats and set off to explore unknown territory, having not the least idea what was ahead of them."
Posted by Bonnie Jacobs on 1/04/2011 04:08:00 PM
Labels: teaser