A Vindication of the Rights of Woman ~ by Mary Wollstonecraft, 1792 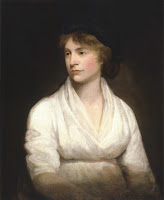 Mary Wollstonecraft (1759 – 1797) was a British writer and advocate of women's rights.  She produced a history of the French Revolution (1794), a children's book (1788), and A Vindication of the Rights of Woman (1792), in which she argued that women only appear to be inferior to men because they lacked education.  Both men and women, she suggested, should be treated as rational beings.

A Vindication of the Rights of Woman is the first book up for discussion in A Year of Feminist Classics reading challenge.  I've decided to join this challenge, but will decide one book at a time which ones I'll read and discuss.

Here's the updated reading list for the year, along with each month's discussion leader: 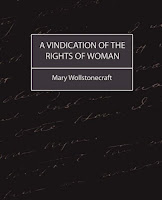 January: A Vindication of the Rights of Women by Mary Wollstonecraft AND So Long a Letter by Mariama Ba - Amy
February: The Subjection of Women by John Stuart Mill and Harriet Taylor Mill - Ana
March: A Doll’s House by Henrik Ibsen - Emily
April: Herland by Charlotte Perkins Gilman - Iris
May: A Room of One’s Own by Virginia Woolf - Ana
June: God Dies by the Nile by Nawal Saadawi - Amy
July: The Second Sex by Simone de Beauvoir - Iris
August: The Woman Warrior by Maxine Hong Kingston - Emily
September: The Beauty Myth by Naomi Wolf - Amy
October: Ain’t I a Woman? by bell hooks AND Third World Women and the Politics of Feminism Anthology - Iris
November: Gender Trouble by Judith Butler - Ana
December: Sister Outsider by Audre Lorde - Emily

A little light reading to start your year? Some of those books for the Feminist Classics are a bit too much for me. Not in content, but style and... I don't know how to phrase it. I guess I am just not a classics gal. I thought you weren't going to do this challenge? I like the idea of picking and choosing as you go

You're right, Helen, I had decided not to do this challenge because the list of books kept changing. I was frustrated because the co-hosts "threw away" classical feminist books I already have and want to read and replaced them with books from around the world. I'm not against diversity, of course, but we can't read every relevant book in a 12-month period. I would have liked to keep the focus on real classics this year and save diversity for next year, but I'll pick and choose from their list in order to keep my own reading focused. Part of my goal is to read what's already on my shelves, including some books left over from the Women Unbound reading challenge.