And there was light! 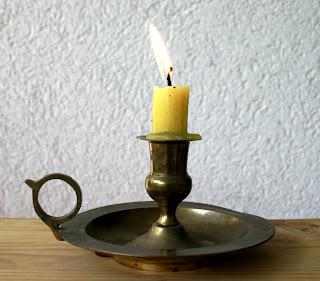 I normally read more than one book at a time.  For the last few days, my nonfiction has been The First Christmas by Marcus J. Borg and John Dominic Crossan (2007), and my fiction has been Hanna's Daughters by Marianne Fredrikkson (1994, English 1998).  They are completely different and I had no reason to expect any overlap, but I love it when something in one resonates with something in the other.  Here's what I read in The First Christmas: 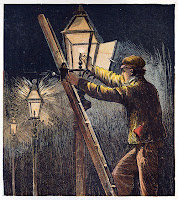 It is not difficult to understand why the symbolism of light is a universal archetype.  We need only imagine how our ancestors experienced night and darkness.  This requires some effort, for we need to imagine a time before we learned how to illumine and domesticate the night with artificial light.  It was not so long ago.  Only recently have cities been illuminated at night; London was apparently the first, perhaps in the 1600s.  It became common in cities only after the invention of gas lighting in the late 1700s.  So also household lighting is recent.  According to an exhibit entitled "The History of Light" at the Rijksmuseum in Amsterdan a few years ago, ordinary people -- meaning the majority of the population -- could not afford candles until around the year 1800. When night fell, it was dark, very dark. Our ancestors knew darkness in a way that we do not.

Here's what I read in Hanna's Daughters: 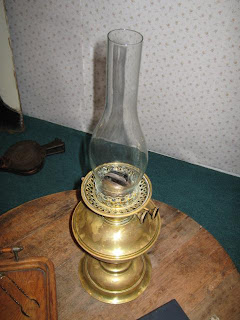 What was most amazing of all, and they were to talk and laugh about it for many years to come, was the light. Fortunately it wasn't Hanna who made a fool of herself this time, but John.

"Getting dark, Mother. I'll run down and get the oil lamp."

"No," said Johanna.  "Look, all you do is this."  She flipped the switch on the wall inside the kitchen door, and the light flooded down on them.

Once Hanna recovered from her surprise, she was pleased Ragnar hadn't been there to see her standing with her mouth open.

The character Hanna lived from 1871 until 1964, so the time period was the mid-twentieth century in Sweden.  The author said the character "flipped the switch," but I remember turning on lights in old houses using push-button switches like this one. The button with white on it represents light, of course, and the black one means darkness or lights off.  The house I grew up in was built around 1920, I'd guess, and had this kind of switch.

We built a house on Signal Mountain in 1965, and for years we enjoyed dark nights with trees around us and multitudes of stars overhead. Then new neighbors built on the street behind us and installed a bright light at the end of their driveway.  The light shone directly into our bedroom and obliterated the night -- and the stars.  Thus endeth our stargazing with the children on blankets in our yard.

Do you have any stories about light?

It's amazing to imagine being unable to afford candles---I'll think of that next time I'm feeling deprived. Really, I reckon I don't have it so bad. :-)

Thanks for sharing. This has happened to me too, a number of times: two unrelated books share a moment of parallel discussion like this. Isn't it interesting?