To hell and back

"I read to explore ideas," I said. Today's ideas are about hell and universalism. Heavy stuff, you say? Okay, let's do it. 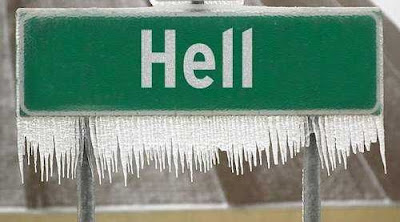 I picked up Jodi Picoult's The Tenth Circle on the same day that Gregory MacDonald's The Evangelical Universalist arrived in the mail. I think it's an interesting synchronicity that Picoult's novel is all about hell -- specifically, Dante's trip through hell -- and the first chapter of the book on religious beliefs is entitled "A Hell of a Problem" because, as MacDonald says in his introduction:

"The argument opens with an examination of the philosophical problems with traditional Christian teachings on hell. It was here that my own doubts about the tradition began, so it seems appropriate to take the reader along a route similar to my own. I argue that whether one believes that God predestines everything that happens or whether one believes that human freedom lies outside God's determining power, it is, or so I contend, well nigh impossible to understand why God would not save everybody. Reason seems to be in serious conflict with traditional theology; and this, I suggest, leads us to enquire whether we may actually have misunderstood the implications of biblical theology" (p. 7).

So let's look at each of these books. The novel is about the hell of dealing with rape, and the religious book argues that hell is NOT the ultimate penalty for sinners because everything we know about God's perfect love indicates that ALL people will be saved in the end. First, the novel.

Picoult managed to get "hell" into this book in an amazing number of ways: rape was hell, school was hell for the teenager after she was raped, her father drew graphic novels and agonized over what a superhero would do, her mother taught "Dante's Inferno" to college students. I remember being surprised by Dante's idea of hell when I was in college. As Laura (the mother/professor) says in the book,

"God, according to Dante, was all about motion and energy, so the ultimate punishment for Lucifer is to not be able to move at all" (p. 16).

That's right, Lucifer was unable to take action because he was imprisoned in ice in the lowest level of hell. Have you ever heard the phrase "when hell freezes over"? In Dante's story, it does. The usual image of hell has been hell as a fiery inferno. Wait! "Dante's Inferno" is a frozen place? Yes, that's right. Frozen as in unable to move, stuck. Like some of the characters in this novel.

I understand how the graphic novel embedded in this story fits in, how it gives the reader an understanding of the father of the victimized girl, how his need of superhero powers takes him to hell and back as he thinks about his past, his wife's infidelity, and his daughter's rape. But it was more a distraction to me than anything else. This is a complex story, but it isn't Jodi Picoult's best, by far. Rated: 8 of 10, a good book.

The Evangelical Universalist ~ by Gregory MacDonald, 2006 and 2008

Fear-based Christianity says only some folks will be saved because God's gonna roast you in hell for all of eternity unless you repent of your sins before you die. My Uncle Jeff had obviously been drinking when he stopped to call me as he was going through my town. Upon hearing I was recently ordained, he told me to "preach hellfire and damnation!" I said no, I preferred to emphasize the love of God, and he said even more emphatically, "Give 'em hellfire and damnation!" The author of this book points out that...

"What Paul is keen to communicate in Rom. 5:12-21 is the overwhelming power of grace, which far exceeds the power of sin and death" (p. 84).

That's the whole point of this book. Actually, his argument can be summed up in four words, his own four words later in the book:

The author chose to write under the pseudonym Gregory MacDonald so the focus wouldn't be on him, but I wish he'd been a bit more succinct. Or a lot more succinct. Don't bother trying to read The Evangelical Universalist by Gregory MacDonald unless you are a specialist in the field and are willing to wade through reams of material about . every . single . little . point . that anybody may EVER bring up on the subject. I got an advanced degree in theology, or else I would have tossed the book long before the end. Rated: "nah," don't waste your time.
Posted by Bonnie Jacobs on 8/27/2009 10:33:00 PM
Labels: book review

Interesting essay, Bonnie. Personally, I believe Hell is to be parted from God. What greater punishment could there be?

And, if I may, where'd you find the photo? It looks like it was taken here in Michigan where Hell routinely freezes over.

That's probably where the photo is from. I got it from here:
http://humor.beecy.net/misc/hellfrozeover/
but the joke on that site may offend some people. (I think it's funny.)

About separation from God ... that's a good definition for hell, in my opinion. But since God loves all of creation, which includes all people, it would be "hell" on God, too, wouldn't it? I don't think God wants to be separated from any of us.

Hmmm. Hadn't thought about God's side of the equation.

Food for thought, for sure. Always a good thing.

In Michigan you can go from Hell (in the LP) to Paradise (in the UP) in one day. Gotta love that.

From Hell to Paradise in a day. Somebody had a sense of humor, huh?