Saturday evening I attended the New Voices Poetry Reading at Pasha's Coffee Shop and enjoyed some of the best poetry and music I've heard in a long time. Five poets were featured: Finn Bille, who is also an accomplished storyteller; Veronique Bergeron, who wrote one of her poems just today; Ray Zimmerman, who read from his collection of nature essays this time, rather than his poetry; Bruce Majors, author of The Fields of Owl Roost; and E. Smith Gilbert, who has published extensively in the United States and Great Britain. 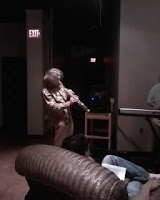 During the intermission, The Undoctored Originals wrapped us in smooth and sophisticated jazz. The haunting voice of the soprano saxophone of Dr. Bob Vogt, pictured at left, drew my attention and held it. Dr. Jim Woodford was on keyboard, and Dr. Rich Fastiggi played acoustic guitar. I could have listened to them all evening. 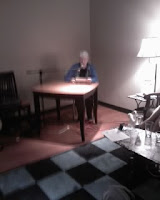 Open Mic followed the jazz, when other local poets were invited to share. I didn't come planning to write a review, so I took no notes, but I did get a few of the poets' names: Billy Holton, an intense young man whose poem inspired me to say "wow"; Chuck Hamilton, who read "My Azizam"; and Ginnie Sams (at right), who read her poem "The Blue Pony," which I first heard when she was the featured poet at Rock Point Book Store in March. Excellent poem. Jim Pfitzer, who emceed this event, used the open mic period to relate the humorous story of how he lost his beard.

Thanks to all the poets and storytellers for their powerful presentations. (And apologies to those whose names I missed.)
__________

Note: I took a couple of photos during the "action," but the lighting wasn't good and I put away my cellphone. Afterwards, Ray Zimmerman asked me to write a review and I thought, If only I'd known ahead of time! I would have brought a good camera or at least gotten a lot closer to the subjects. Knowing I could have done better (much better), I still wanted something to illustrate this review of the evening, so please forgive the poor quality of these pictures.
Posted by Bonnie Jacobs on 8/17/2009 03:56:00 PM

Thanks Bonnie - I enjoyed reading the review.

Pasha's Living Room is a great venue for poetry and music. It is thrilling to read in such an ambience of art, music, and an appreciative audience. Thanks for writing the review.