My friend Sherry asked, "Have you ever heard of Bookcrossing? It is a website that encourages people to set books free in the wild (leave them random places) so that others might find them and experience the book." Yep, I've been a member since March 26, 2003. In that time, however, I've released only one book into the wild. It's a book I never reviewed here, since I didn't start this blog until three years later. Here's what I wrote about it many years ago.

Three generations of women: Suzanne is a respected lawyer now facing the prospect of her wayward older daughter (Elena) moving back home and, more troubling, her disapproving elderly mother (Beverly) is ill and in need of help. For the time it takes to read 371 well-written pages, the reader escapes into this world of other women. Though it is far from the major point of the novel, I especially enjoyed reading about Rachel, Suzanne's other daughter, who chooses to become a rabbi.

Then I "released" the book the next day, Sunday:

About 8:30 p.m. my "book buddy" and I went to eat at Panera Bread -- and to release my book. After standing it on the long, low windowsill beside a table, I took a couple of photos of the book "in the wild." Then we sat two tables away so I could keep an eye on the book while we ate. Finally, a policeman sat at that table, and a policewoman soon joined him. Neither noticed the book. Two other policemen joined their table after getting their orders, and the last one to sit down talked for several minutes before he noticed -- and picked up -- the book. He showed the policewoman the "Hi! I'm a free book!" marker sticking out the top of the book. I was sure that, if he didn't take the book, the woman would. But no, he stood it back on the windowsill before they all left. When we left soon after that, the book was on its own, fending for itself -- and possibly feeling unloved after being rejected by the policeman! I wonder if it will still be there tomorrow. A half dozen women were sitting at a table nearby, so maybe one of them noticed my little book in the wild. I hope someone takes her home with them tonight. 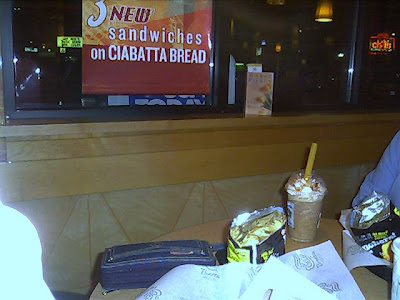 Click to enlarge the photo to see the "free book" marker in it. On Monday we went once more to check it out:

We two book buddies drove around the deli at lunch time today. The book was no longer on the windowsill, so it seems to have found another reader. :)

Glad for the happy ending :-)

I hope it was a happy ending, June. That's how I chose to think of it, rather than the depressing thought that a worker cleaning up at the end of the day chucked the book along with the discarded paper cups.

Hi, Bonnie! I heard about Bookcrossing years ago, but had forgotten about it. Thanks for the reminder. I'll be sure to check it out again. I have a few books I'd like to release.

I love the picture of you in the header. What were you reading there?

Beth, I was holding Joseph Campbell's The Power of Myth in one hand and trying to aim my cellphone camera at myself with the other. The expression was supposed to indicate I'd found something interesting, and I think I more or less got the look I intended.

It took 4 or 5 tries before I got one that didn't chop off my chin or reflect light from my glasses. Since I opened the book to a random page, I couldn't begin to tell you what it actually said. But I did know enough to focus my eyes on the page as I clicked. At first I was holding Karen Armstrong's The Great Transformation, but decided a darker cover would frame my face better. It does.