Facebook has a meme going around encouraging folks to name "15 books that will always stick with you." I was interested in seeing what books I would come up with that were meaningful to me. I had about twice this many on my list and narrowed it down by weighing how important each book had been in my reading life. I posted all 15 on my Facebook page, but here I'd rather share more about each book. Though I could have listed them in the order they came into my life, I listed them alphabetically. 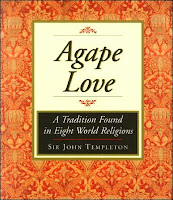 Altruistic love (agape) ties together all the major religions of the world. The first sentence in the book says:


"Agape love means feeling and expressing pure, unlimited love for every human being with no exception" (p. 1).

We could even ask, if a religion is without compassion, is it even a religion? When religious groups veer into hatred and violence against others, they have lost their focus.


"Perhaps without even being fully aware of it, religious leaders and their followers through the ages have defined religion largely in terms of love. ... any system of beliefs that teaches or tolerates hatred or even apathy toward others does not deserve to be considered a religion in the first place" (p. 2).


Islam: "The truly charitable person seeks out those in need who do not or cannot ask for help" (p. 39).

Hinduism: "Thus, agape can be viewed as a natural course of action for those operating at a high level of spirituality" (p. 49).

Confucianism: "Some people treat love as if it is a quanity that can be exhausted. They are careful not to use it up, not to love others for fear there will be none left for family and friends. But agape is unlimited. It cannot be 'used up.' in fact, to Confucius it was quite the opposite: the more we love, the more capable we become of loving" (p. 85).

Native American Spirituality: "One of the central characteristics of that Native American religion is its emphasis on caring for all creation ... Agape in the Native American context affirms that everything we see, hear, and touch is part of the web of life" (p. 95).

This book has been so meaningful to me that I've mentioned it over and over since I started blogging in January 2007:

I have used it in many classes I have taught, from Wednesday evening study groups at church to the college class on religions of the world. By now you have probably figured out that I rate this book: 10 of 10, couldn't put it down, even when reading it repeatedly.
Posted by Bonnie Jacobs on 8/30/2009 10:01:00 PM
Labels: 15 books, book review