Although I haven't "officially" written a review of this book (until now), I have mentioned it several times on my blogs. During Dewey's 24-Hour Book-A-Thon in June 2008, we were challenged to write a limerick or haiku about one of the books read during the read-a-thon. Mine related to Forgive Me by Amanda Eyre Ward. (Be gentle with your evaluation of this haiku, folks, and consider this ... I wrote it around 3:00 or 4:00 a.m. after being in a marathon read for 15-16 hours ... with 8+ hours to go!)

That gives you an idea of the book's plot. Another mini-challenge had us research the novel's setting. Forgive Me was set in Cape Town, South Africa, and I found some wonderful photos to help me visualize it: 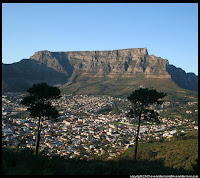 The best way to grasp what it was like during the time of Truth and Reconciliation Committee meetings in South Africa is to read this book, which I highly recommend.

Here are five interesting facts about South Africa, gleaned from my research:

(4) Wikipedia had this photo of Bo-Kaap, an area of Cape Town where part of the story is set.

(5) Read what Absolute Vanilla, a South African, wrote about the violence and lack of logic in her country.

Last year I posted what the author wrote about being a writer. A few months later my Bella Novella book club discussed Forgive Me.