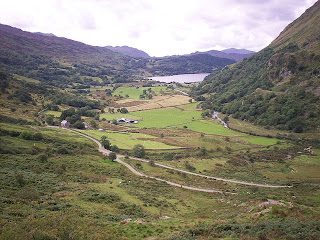 I've been to Wales, via book. After completing A String in the Harp by Nancy Bond this morning, I spent the next couple of hours googling images of mid-Wales and Borth, the book's setting. Because it's such a well-written book, I felt the pictures accurately portrayed what I'd been "seeing" as I ventured through half a school year with a college teacher and his three children.

Fifteen-year-old Jen had stayed home in America when her father, brother, and sister moved to Wales for a year, after the unexpected death of their mother. When she joins them in December for a holiday visit, Jen discovers a distracted father, a sullen brother, and a young sister who misses her terribly. Peter, the middle child, finds an ancient harp key that somehow tunes in to scenes from the life of the legendary sixth-century Welch bard, Taliesin. Strangely, Peter isn't the only one to experience that earlier century; people around him -- including neighbors -- see lights and hear fighting, too.

It sounds like a fairy tale, but I thoroughly enjoyed this magical realism and learned about the life of Taliesin while exploring the countryside of Wales and visiting the farms in the vicinity of Borth. I feel like I've actually been there and felt the mysterious history still living in the people and the soil of Wales. When I "travel" in books like this, I can say with one of the characters (p. 273):

"The world looks quite different to me from this side of the ocean, I have to admit." 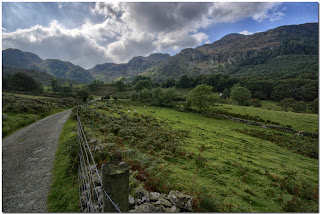 I love it when you get transported to a place through the story!

Isn't it wonderful when a well written book can bring a place so to life!