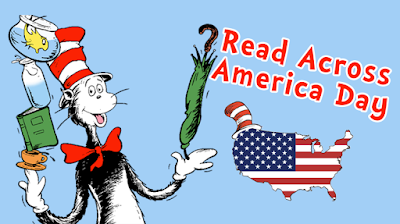 I just discovered that March 2 is National Read Across America Day in the United States, and the day is more than half done.  How could a long-time book blogger not know about such a day?  And what, pray tell, is the Cat in the Hat doing in the image above?  There are usually images all over the internet if there's a special "day" for something, so I googled and learned why that Cat in the Hat is there: 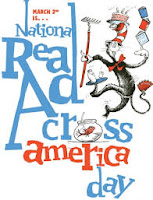 Read Across America Day, also known as Dr. Seuss Day, is a yearly observance in the USA inaugurated by the NEA (the National Education Association).  It is held on the school day that is nearest to March 2nd, the birthday of Dr. Seuss.  Theodor Seuss "Ted" Geisel was an American children's author, political cartoonist, illustrator, poet, animator, and filmmaker.  He is known for his work writing and illustrating more than 60 books under the pen name Dr. Seuss.

Today is also TWOsday, so I'll add a second subject to this post.  Another surprise, actually.  At 10:00 this morning, my iPhone suddenly started blaring a warning about a possible tornado.  It has never done that before, and I've had the phone since last August.  Since it did NOT add that they were testing the system, I assumed it must be a real warning and went into my bathroom — and away from any windows.  When I called my friend Donna, she said they always test the system at 10:00 on the first Tuesday of each month.  Okay, today IS the first Tuesday of March, but the question remains:  WHY did my phone, which I've had for six months now, suddenly decide to scare the bejeebers out of me today with its insistent warning?  Nevermind, why don't we just go read a good book?

When I was a librarian we celebrated National Read Across America Day each year. We had a theater teacher that I wrangled into coming in at lunch, donning a Cat in the Hat hat, and performing Green Eggs and Ham. He would do funny voices and brought various instruments and noise makers for the students to do at various points. The high school students loved it!